An interesting report. It suggests quite strongly that the pilot's training was more than rather inadequate in some areas .. one hopes that this is not a characteristic of pilots for this class of aircraft.

The CG envelope cited in the report is quite strange and I might correspond with the OEM to enquire as to the reasons it is as it is. Either way, if there are some of these in Australia, it might be useful if we have a looksee at the various OEM POH weight and balance data.
Engineering specialist in aircraft performance and weight control.
4 years 5 months ago #71

I've been looking over the thread and have a question regarding post 21 item 7. Could you give a real life example of an aircraft with the sloping line which can't be made a straight line on the index graph ?
4 years 3 months ago #72

Certainly can do that for you .. there exists a number of aircraft with that problem for IU graphs. I'll dig one out of the archives for comment.

Looking at the 340B CG envelope 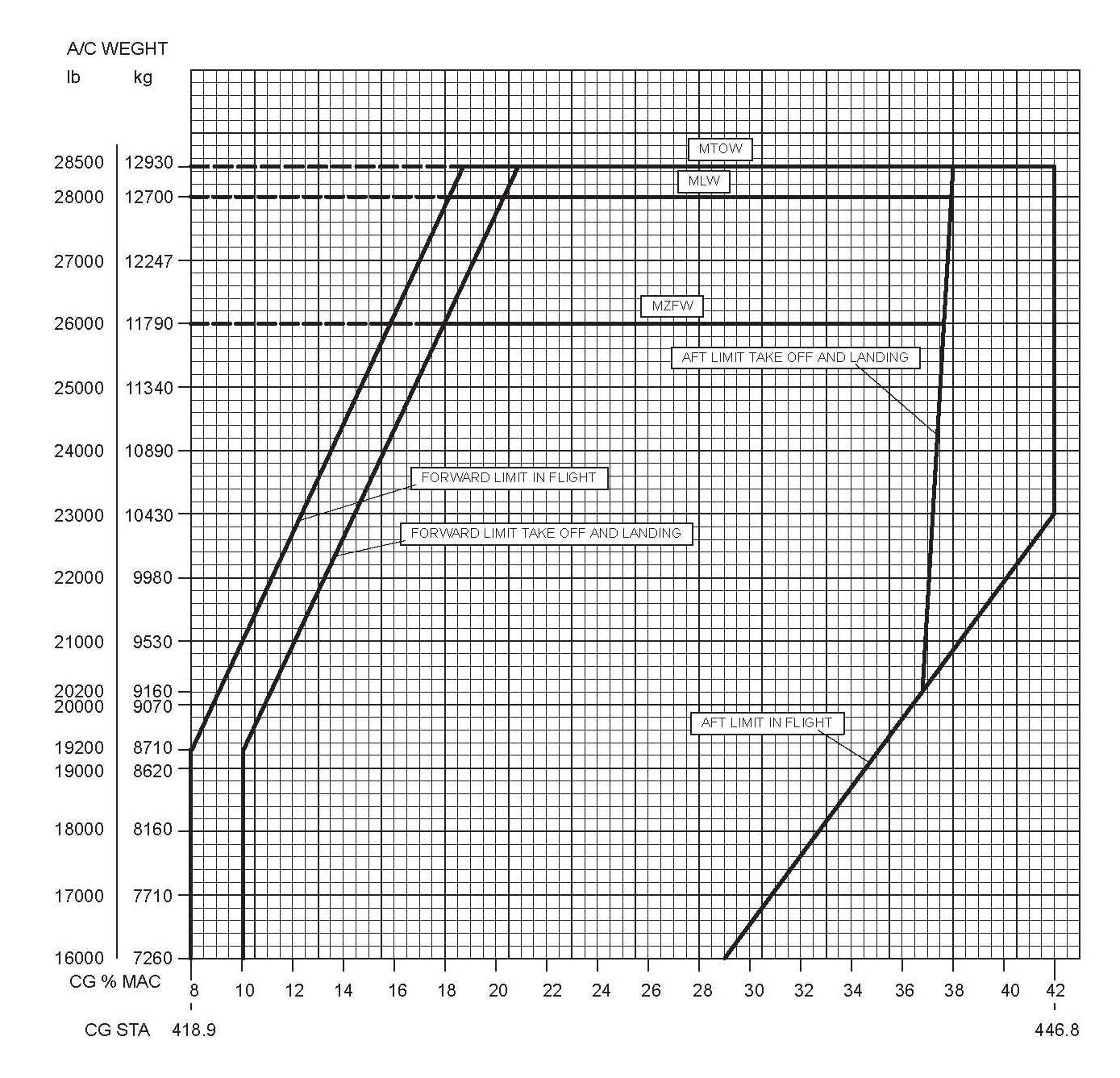 we can see several sloping CG limit lines shown in the next graphic as red overlays. 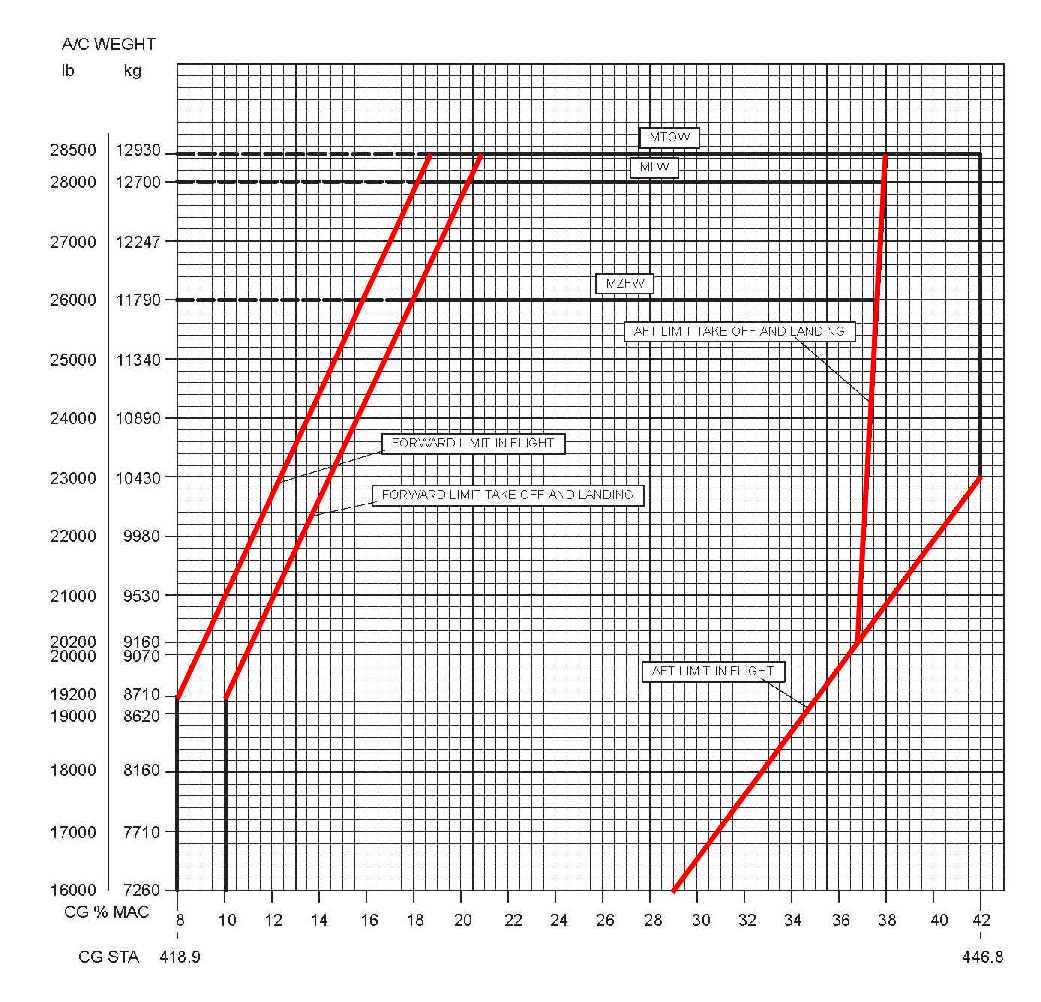 If we look at the IU equivalent to the first graphic, we get 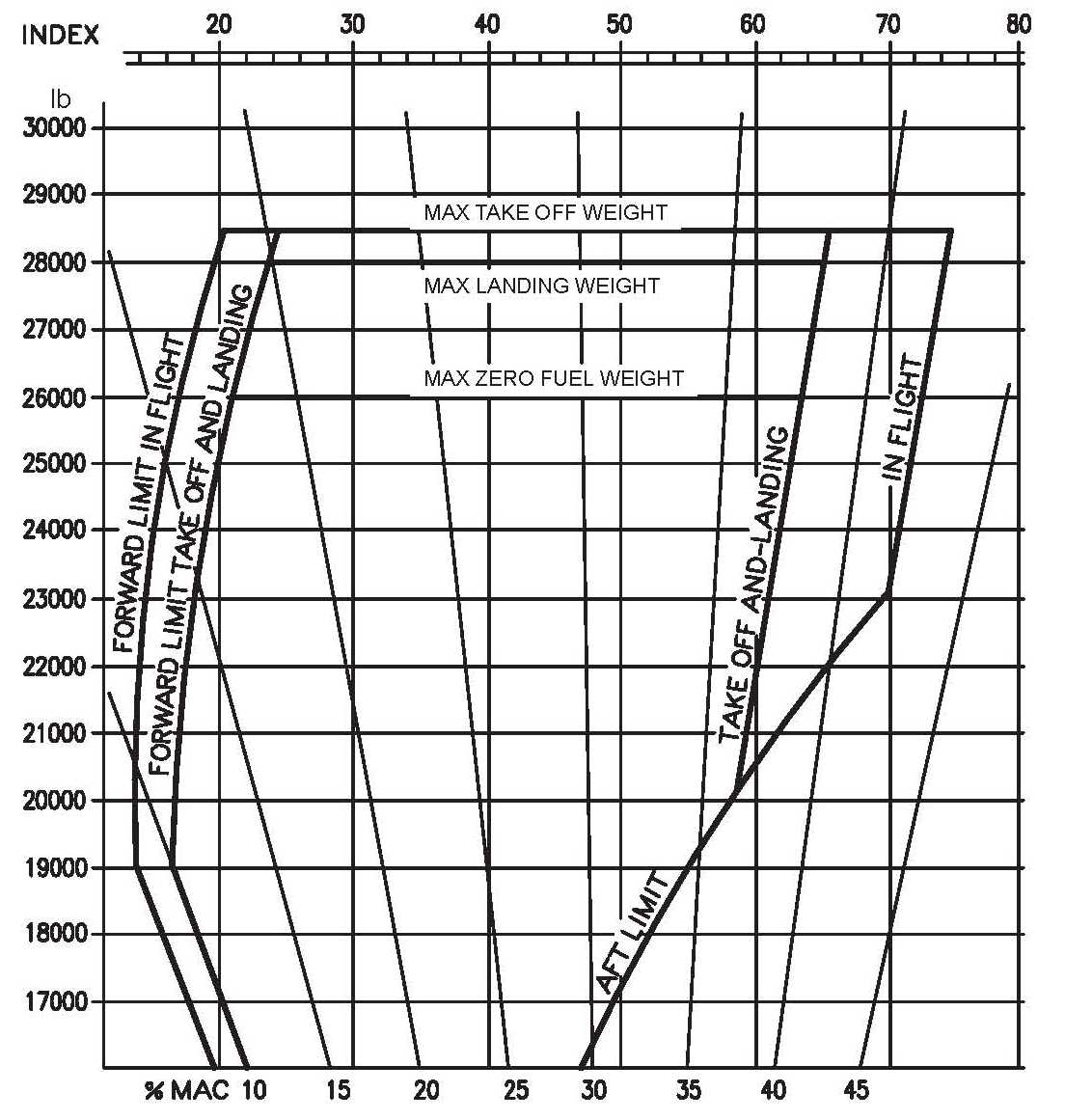 (Note that the IU envelope uses a suitable trim datum and entry IU shift in the normal manner).

The sloping lines in the first graphic are the ones which, for the IU (or moment) presentation, convert to quadratic curves. This is shown in the following graphic. 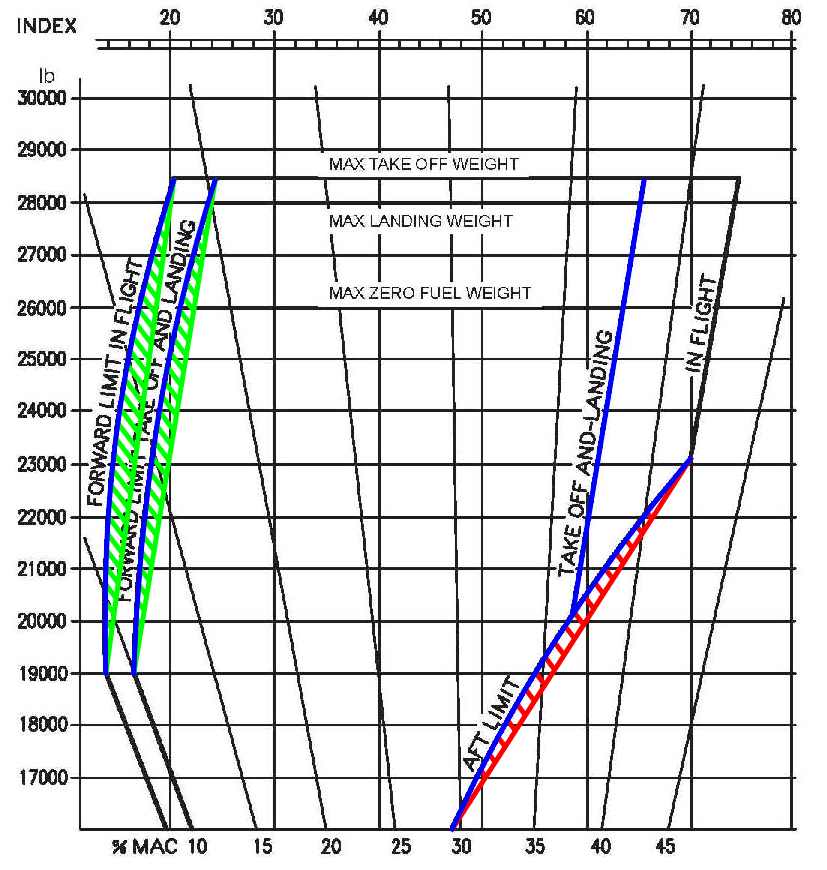 The correct curves (quadratics) are overlaid in blue.

For the forward limit lines, a straight line representation (green line) is INSIDE the envelope and is conservative. If we use the straight line, we choose to forego a section of the usable envelope shown as green hatching.

However, for the aft limit lines, this is not the case.

Specifically, for the higher weight limit line, the change in CG is small and the curvature is so slight as to be indistinguishable from a straight line. It would be reasonable (although not strictly correct) to represent this limit as a straight line.

An old topic, I know, but can you explain the numbers for this aircraft's loading, please ? They just do not seem to match up and the weight information page is confusing to me

We've been fairly careful, so far, to avoid identifying operators and WCOs. That's going to be a bit difficult here as the source link is identified for the download. We will, however, be a bit circumspect if there is a need for harsh assessment so that we avoid being seen to step away from the basic intent of providing information to Bob's students and other readers.

I've had a quick look at the site (I trust that Ray V continues to enjoy his retirement) and the club has set out to achieve a useful aim in that it has set up a variety of pdf files for each aircraft in the fleet to provide some basic information for their pilots - well done.

However, I can see some unfortunate outcomes/considerations which are worth comment for the knowledge benefit of the new pilot cohort in Bob's ranks. Again, if such is drawn to your attention, you will be more likely to retain an awareness of some of the problems which are part and parcel of the weight control game.

I guess, with the club's being pretty well next door to Bob's establishment, my comments will be seen there and, perhaps, may result in some improvements to the club's present and admirable effort in this matter.

I will offer comment on each of the aircraft data sets in turn over the next few days or so.
Engineering specialist in aircraft performance and weight control.
3 years 1 week ago #76
Last Edit: 3 years 1 week ago by John.Heddles.


The weight and balance summary document appears to have been copied from the aircraft POH, which is fine.

The Load Data Sheet page (with the empty weight and so forth) has been set up for use with a MAF trimsheet called up in Note 3. I haven’t tried to run quantitative checks on the load data sheet but it appears to be in order. My only comment is that the configuration is not sufficiently explicit so there is a question over whether the load data sheet configuration matches the POH data and, in turn, matches whatever configuration the aircraft is in at present.

The trimsheet entry data in the load data sheet is incompatible with the standard OEM loading system data contained in the POH due to the use of a non-OEM datum reference for the trimsheet. As we have discussed earlier in this thread, that is quite common practice. Please don’t try to use the trimsheet entry data together with the OEM POH loading system data as that isn’t going to be very useful, ie it isn’t going to work correctly.

(b) the load data sheet provides entry units of kg and kgmm (operating weight) so, by dividing the kgmm value by 1000 it becomes compatible with the POH loading system. Note that this doesn’t represent an error in the load data sheet as the WCO has set up the document for use with the MAF trimsheet – ie, there was no intention for the document to be used with the POH loading system data. It is only the unfortunate circumstance that the trimsheet is missing that we need to go searching for another way to address loading.

Note that (presuming that the documents on the website reflect what is in the specific aircraft POH) the present situation potentially exposes the club, aircraft owner, and operating pilots to legal censure with respect to CAO 100.7 related regulations in the event of a mishap which attracts scrutiny. I am surprised that routine CASA audits have not picked up the problem previously and required it to be fixed.

In my view, the club should get a WCO to review (noting that the load data sheet is quite dated) and reissue the load data sheet to be compatible with the POH loading system data. Alternatively, the MAF trimsheet should be used for loading IF the trimsheet and actual aircraft configurations are identical. It is a lemma that the loading system configuration and the aircraft configuration must be the same for the two to work correctly in conjunction.
Engineering specialist in aircraft performance and weight control.
3 years 1 week ago #77

Looking at the C172 examples, at


The data for RAQ/SPQ/IVW appears to be OK although the files have not included all the LDS pages. The data for SPP and YRE, again, has IU units not the same as in the POH. For this, the same sort of comments as for the C206. I really am surprised that CASA audits haven't picked this stuff up - presuming that preflight work includes a look at the weight and balance, it is pretty obvious stuff.
Engineering specialist in aircraft performance and weight control.
3 years 5 days ago #78