The flying school/charter website I got these from has another two to go for you, including an example sheet. The scans below relate to the Warrior but are a different type of trimsheet. Hopefully, this one is OK. 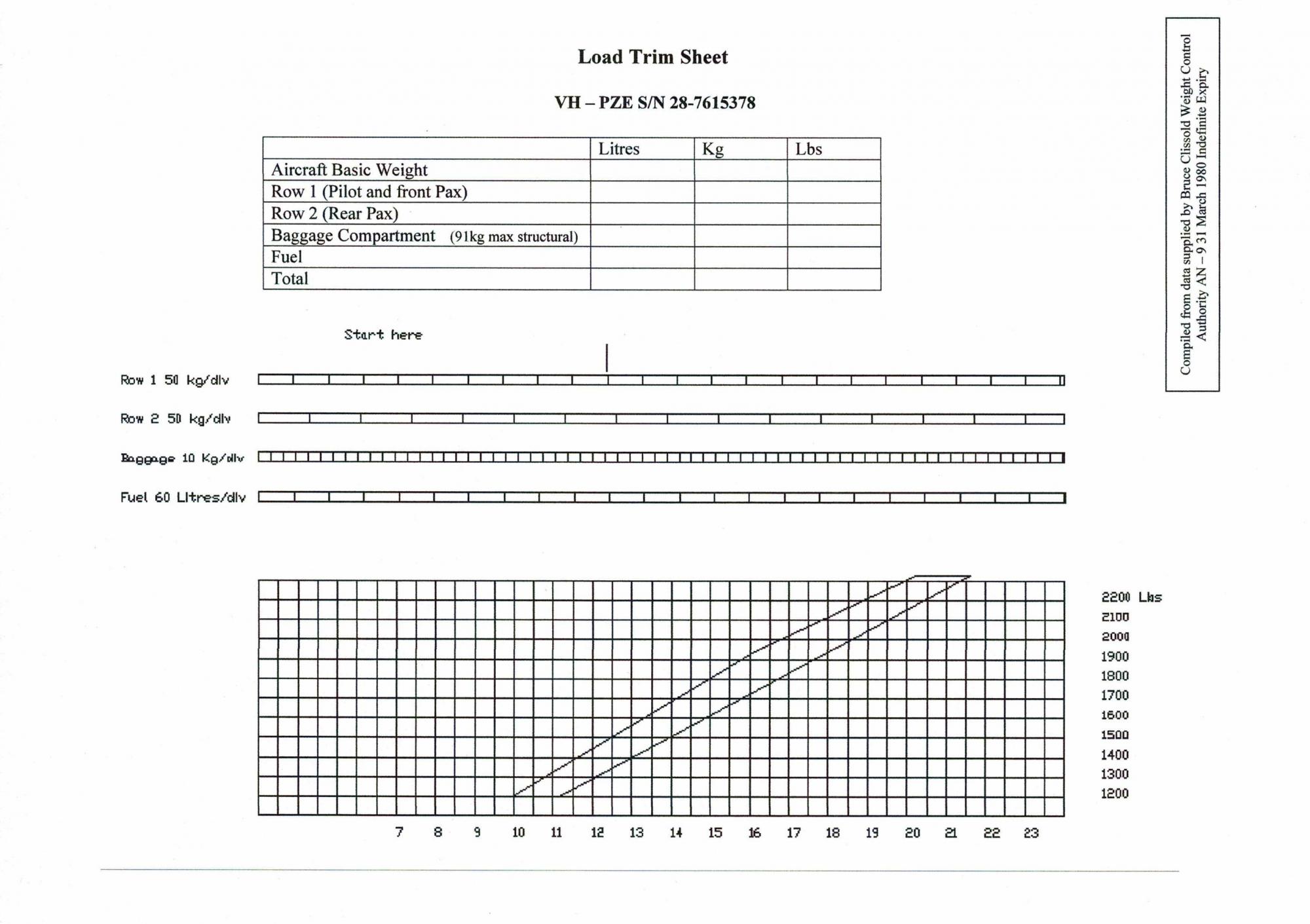 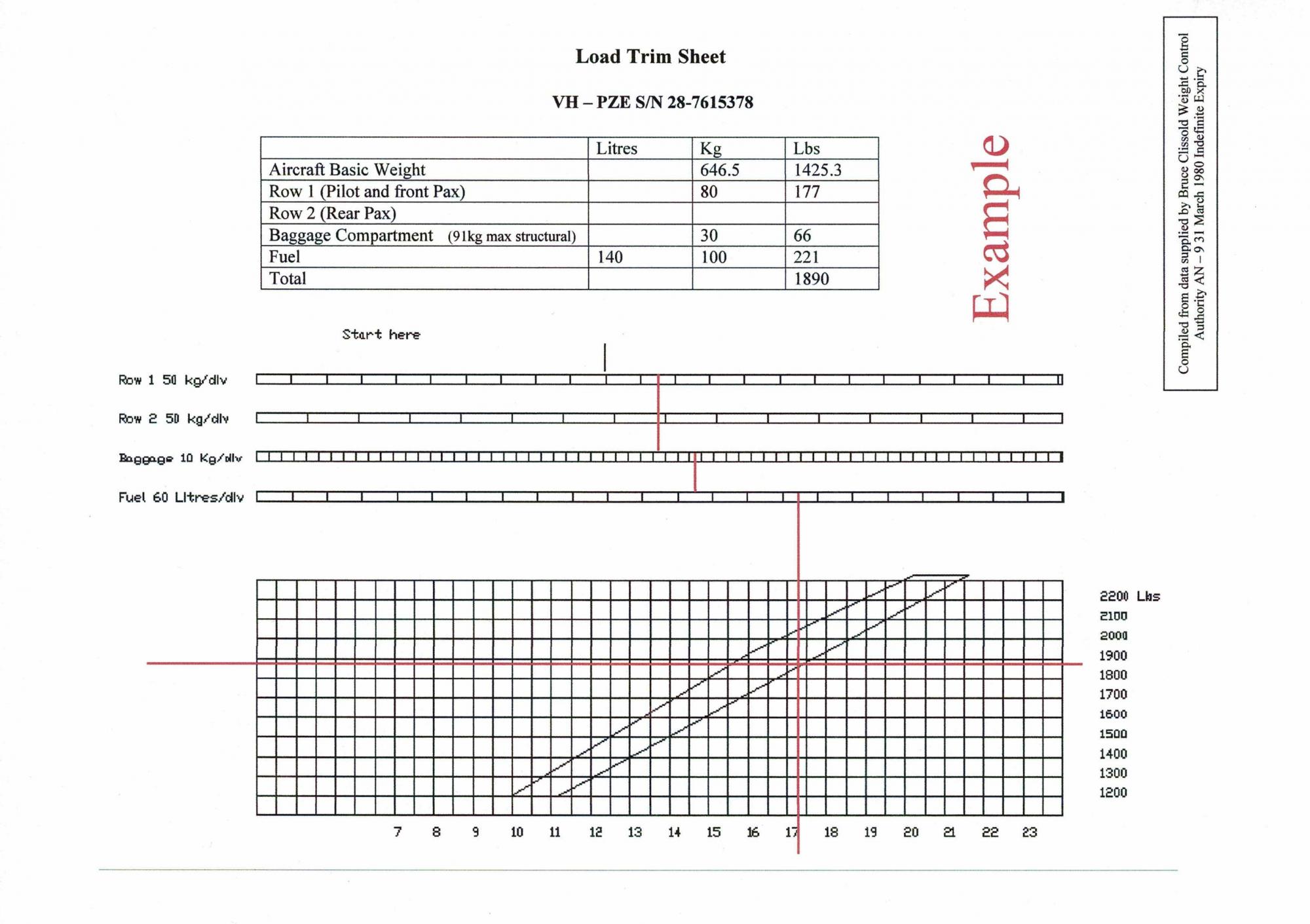 I note a reference to Bruce Clissold in the top RH margin. This certainly doesn't appear to be one of Bruce's sheets so I'll run a copy by him for comment.

In the meantime I'll have a look at the sheet and come back with some comments in a couple of days.
Engineering specialist in aircraft performance and weight control.
3 years 7 months ago #32

Things are on the improve .. this sheet, at least, works. The design standard, though, remains quite poor.

(a) re the reference to Bruce, he has never seen the sheet and, whatever else the reference might seek to infer, it doesn't constitute any form of approval by Bruce.

(c) the tabulation has no provision for zero fuel weight. Note that the example doesn't look at the zero fuel situation at all - bad.

The basic regulatory requirement is that the CG is shown to be in the envelope throughout flight. Conventionally, we address that by checking at zero fuel and ramp conditions.

As a note, this doesn't always guarantee that things are OK. If either the fuel tank is non-prismatic (ie not constant arm) or the envelope limits are not a simple straight line, conditions may exist where an intermediate fuel load can put the CG a little outside the envelope and, as such, the loading is non-compliant. Generally, one hopes that the loading system designer (it is a problem not exclusive to trim sheets) will address this in the specifics of the loading system directions and structure.

(d) as with the earlier sheets, there is no information relating to the entry IU other than an isolated mark. Note that we can refer this to the scale at the bottom of the sheet but that is both unconventional and a recipe for error

(e) the IU change load lines do not indicate the direction to move. Recipe for error.

(f) the IU divisions in the trim lines are not clearly defined at the RHS of the lines. Again a potential source of error.

(g) the fuel IU change is not a decimal quantity. 60 litres is just asking for error. Of interest, the example has a significant fuel error in the fuel calculation - poetic justice.

(h) the fuel line purports to be based on volume (ie litres). The calculation, however, is based on weight. Unless there be some information to clarify the weight per division, there is a high likelihood of error. This is particularly so in Australia where the fuel used either will be 100LL or 100/130. The SG values for each are different .. hence the volume to weight conversion is different.

(i) the envelope is drawn rather strangely. The grid should have been drawn so that the envelope remained inside the grid for interpolation/reading.

(j) the sheet datum is the OEM datum. As such it is inappropriate as the error in completing the trim sheet is higher than it need be. A better datum would be somewhere inside the envelope so that the envelope, as drawn, is an upright, boxy shape.

(k) the IU change lines are based on kg. The envelope is based on lb. Errors waiting to happen.

I would not expect that any of the more experienced and competent WCOs would consider approving this trim sheet for use.
Engineering specialist in aircraft performance and weight control.
3 years 7 months ago #33
Last Edit: 3 years 7 months ago by John.Heddles.

- Re calculations at zero fuel, the exams occasionally run ballast calculations using fuel. What is the situation here ?

- Can you elaborate on the problems with fuel calculations which you have suggested ?

Thanks for your commentary so far. I am finding it very useful. A lot of things I didn't know.
3 years 7 months ago #34

(b) a presumed risk with carrying fuel as ballast is that, due to emergency situations, the aircraft may end up using some of the ballast fuel .. ergo, a school of thought would have you ensure that you are still within the envelope at ZFW regardless of the fact that you intend to carry fuel as ballast

(c) CASA airworthiness has had a long held view that (especially for smaller aircraft) ballasting with fuel is an undesirable technique. Indeed, going back to the 70s/80s, the then hierarchy attempted to impose this view as a requirement. Some of us, such as I, in the absence of regulatory support, took a contrary view and there were many and varied robust discussions (as they say) on the matter.

(d) fuel ballasting on larger aircraft is quite usual. Indeed, for some recertifications involving a MZFW increase (typically passenger to freighter conversions) outboard fuel ballasting may be an STC requirement, often for fatigue management considerations. Ansett had such a requirement for the L188 freighters (a wonderful pilot's aeroplane but that's another story)

(e) for the exams, the examiner has the rather difficult task of endeavouring to ensure that a reasonable and general standard of knowledge goes with the pass. As a result, some of the exam ins and outs may not be particularly pertinent to routine line operations out in the real world. Not really a problem .. just means that the student has to jump through the hoops necessary to achieve a pass.

Can you elaborate on the problems with fuel calculations

One can summarise the fuel considerations in the following manner -

(a) for the usual light aircraft CG envelope (ie fairly simple) with a nice simple set of straight limit lines and a prismatic fuel tank (think shaped like a big suitcase), things are pretty simple and a check of ZFW and BRW (or TOW) loadings is sufficient to establish what's what 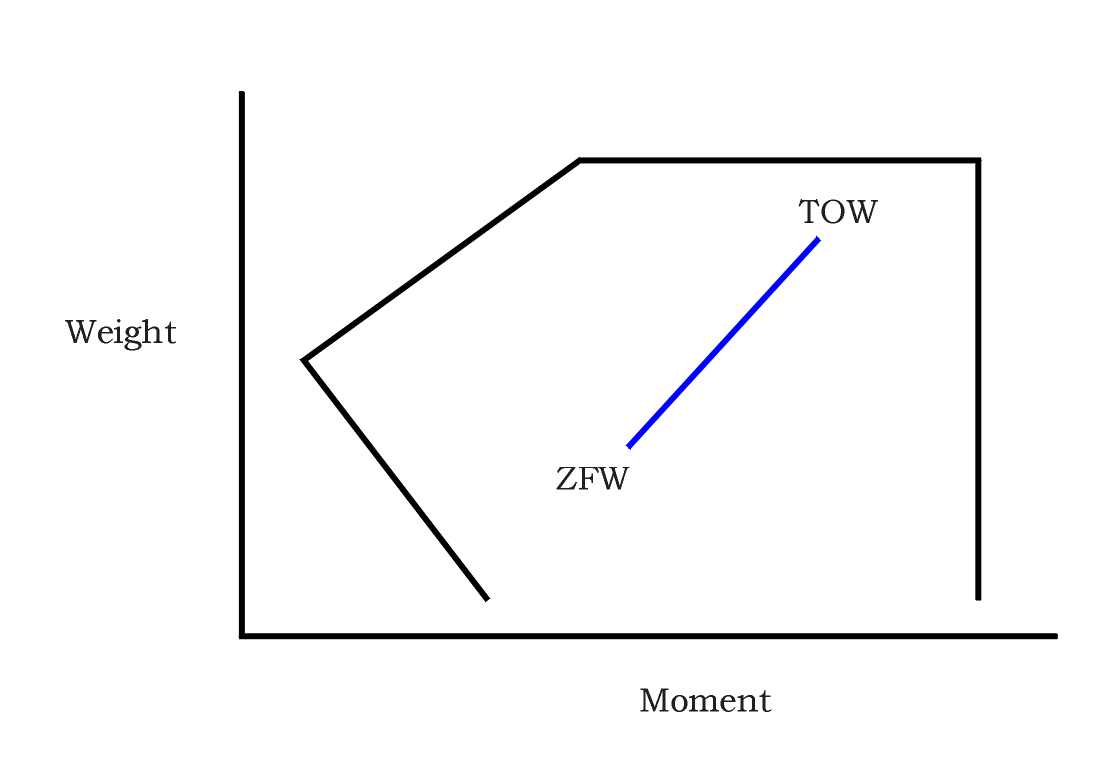 (b) if either end of the fuel line falls outside the envelope, it is pretty obvious 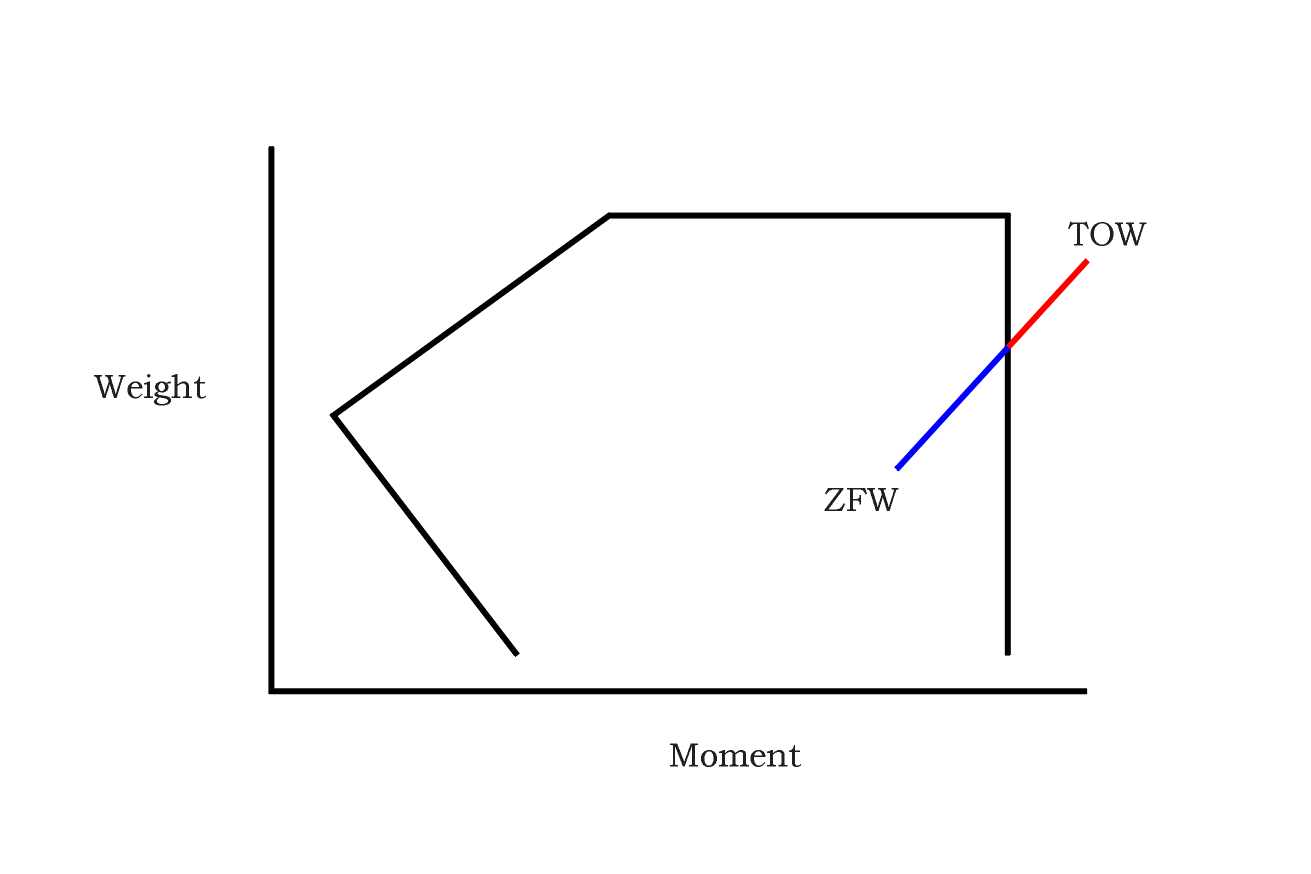 (Aside - we are ignoring the fact that the forward upper limit line is actually a curved, rather than straight, line - for simplicity)

(c) However, some more complex envelopes will have odd shapes and discontinuities and you may see something like 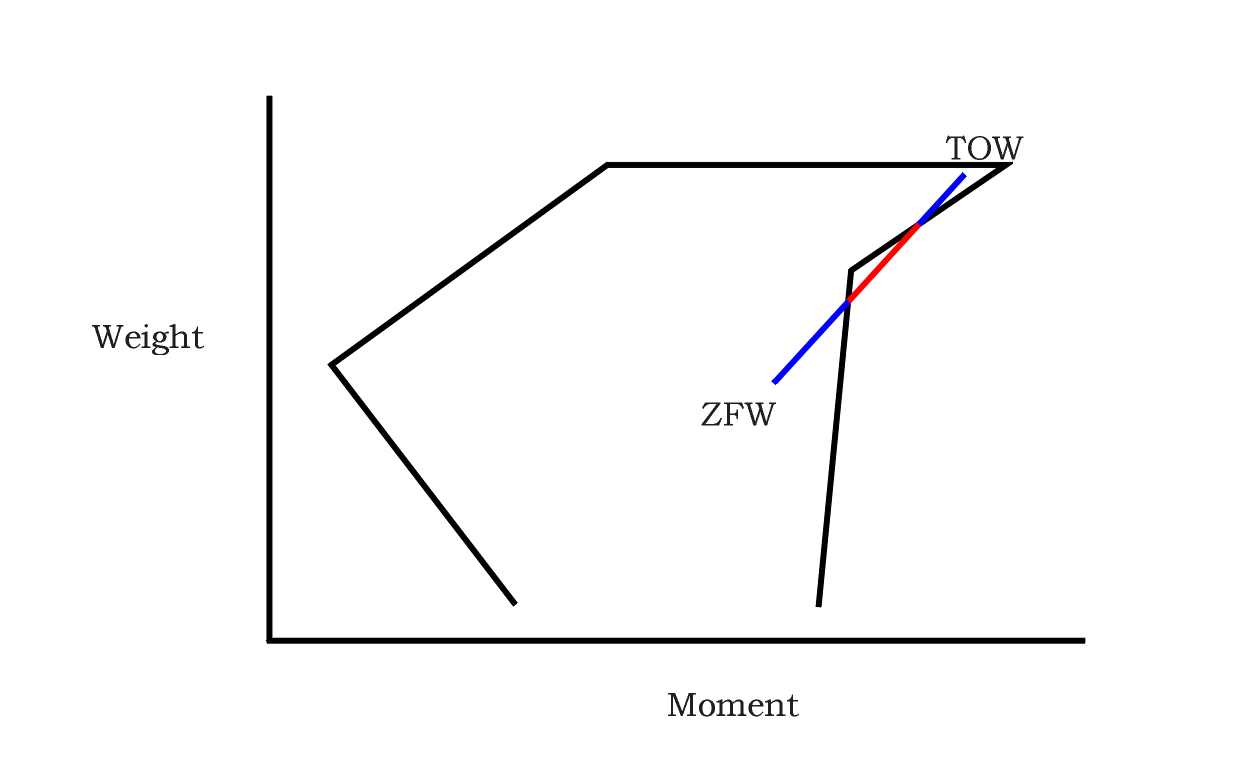 (d) Similarly, if the fuel load is not prismatic (this can be seen on smaller aircraft as well as large, swept-wing jets) 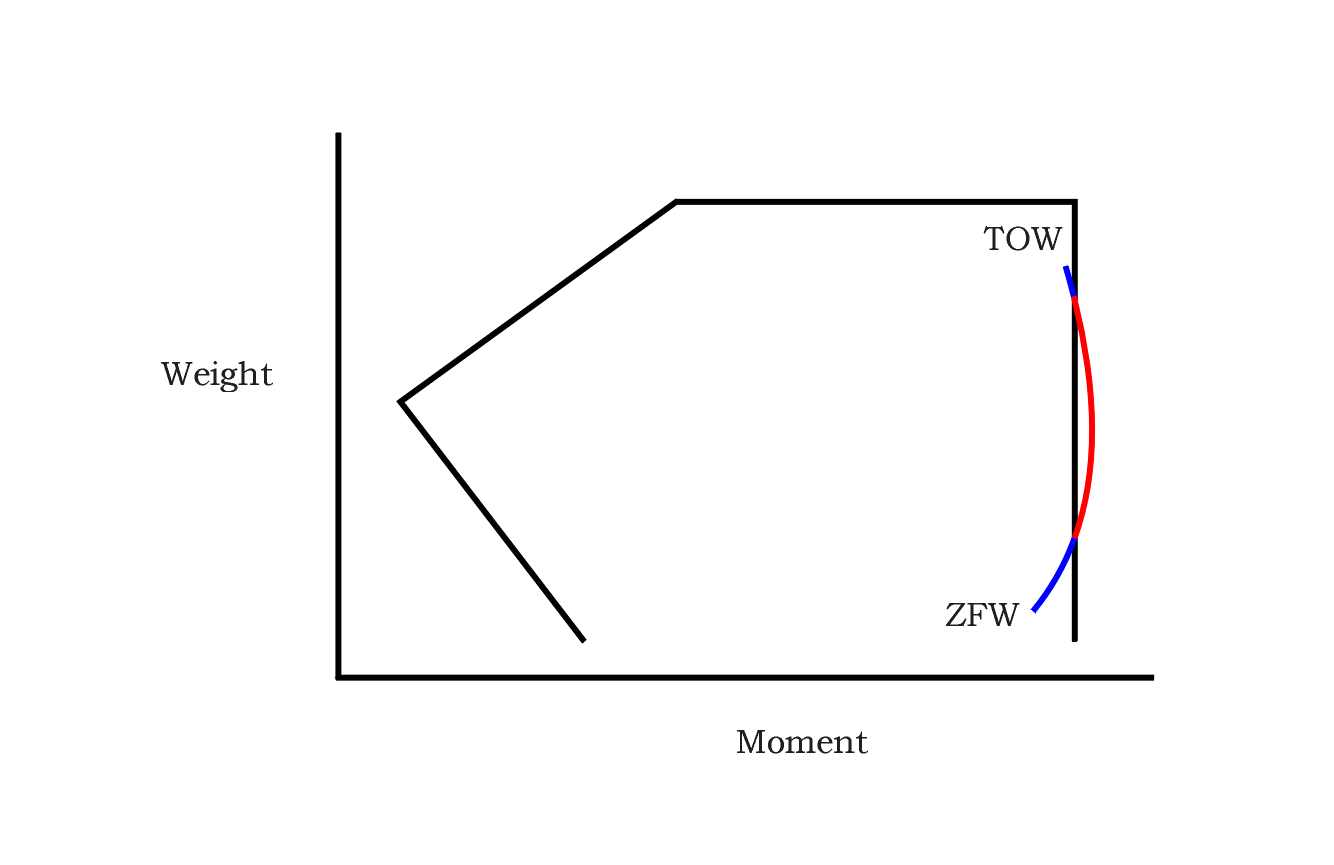 one can see a similar sort of problem

Clearly (c) and (d) can be combined for a given aircraft. For these situations, the WCO should either curtail the envelope limits as drawn to make the problem go away, or provide some other form of guidance to allow the person completing the loading system to address the problem. In this latter case, it might be as simple as identifying parts of the envelope for the ZFW case where some intermediate fuel load checks are required to spot any problems.
Engineering specialist in aircraft performance and weight control.
3 years 6 months ago #36

In your last post, what are the aircraft you are using as examples, please ?
3 years 6 months ago #37

The envelopes were made up to suit the explanation - there was no beneficial purpose to be served by using specific aircraft examples. The basic envelope shown, though, is a bog standard, typical light aircraft example (datum used is the aft most cg limit as is my usual practice with trim sheet design).

For example (c), it was modified to suit. However, there are similar discontinuities displayed by actual aircraft.
Engineering specialist in aircraft performance and weight control.
3 years 6 months ago #38

Thank you for the additional information.

The final trimsheet from the website is for a Cessna Cutlass. It appears to follow the same general pattern as the second Warrior trimsheet. I guess it won't make the grade either ? 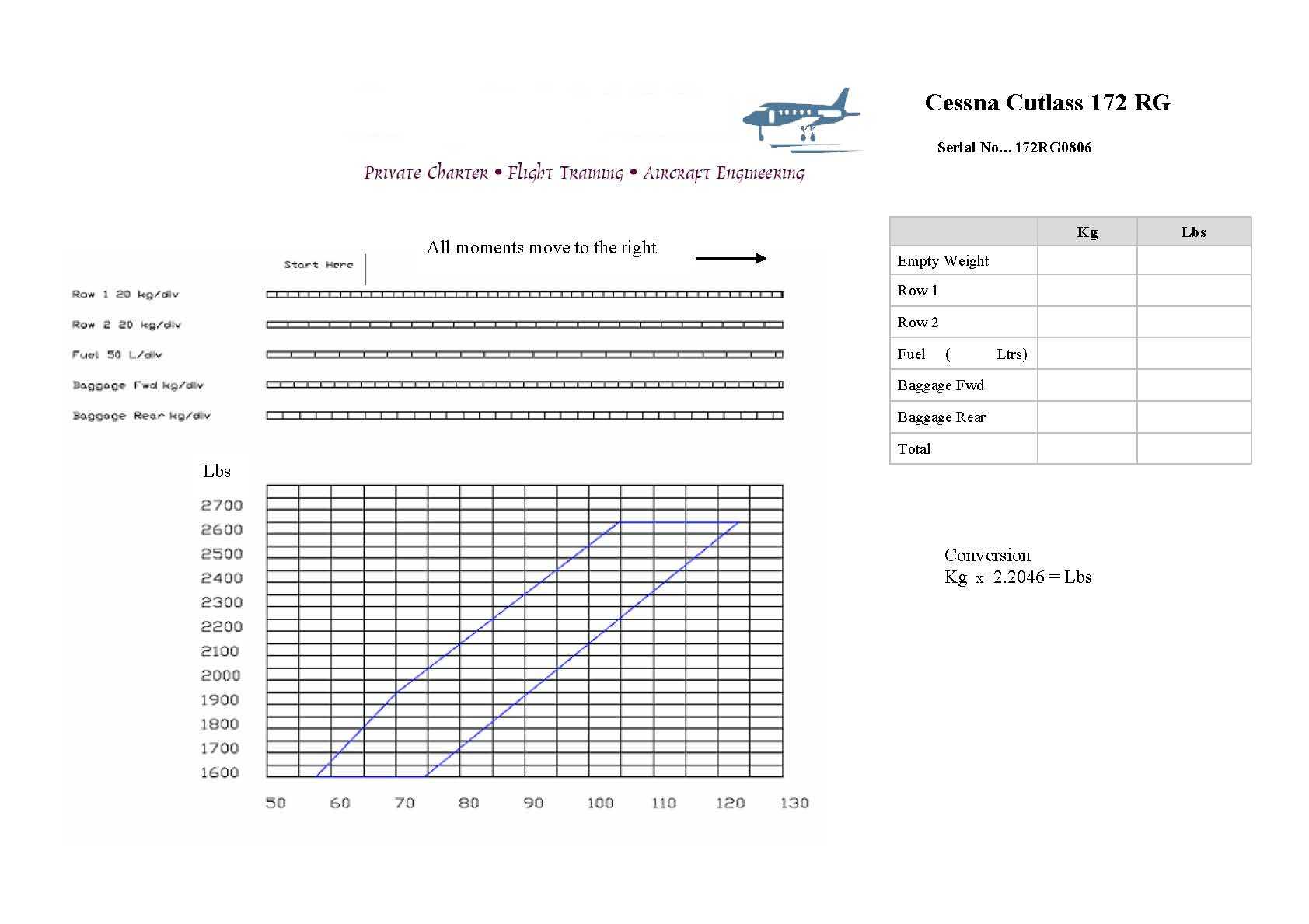 It certainly doesn't make the grade: there is no scaling information for the baggage lines. Will have a look through it and come back in a day or two.
Engineering specialist in aircraft performance and weight control.
3 years 6 months ago #40