Hi all, I got the below question wrong in one of the PPL practice exams. I've added the green line to show why I thought the answer was 1000kg.

I thought there would be a climb weight limit with the high pressure altitude and temperature, should I be ignoring that line under any circumstances? 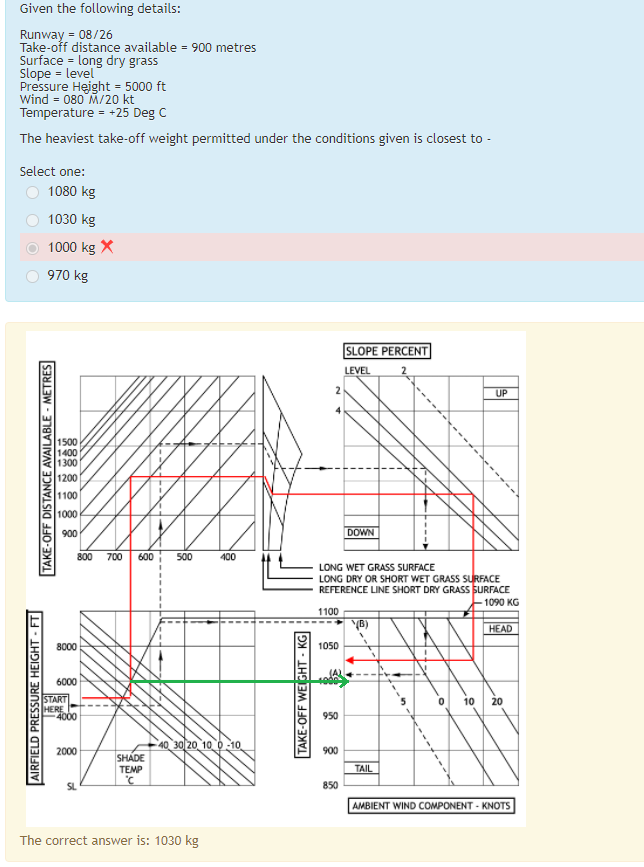 I thought there would be a climb weight limit with the high pressure altitude and temperature, should I be ignoring that line under any circumstances?

The climb limit line, if it exists, must always be checked as it is one of the limits which may be the limiting consideration.

A quick run around your lines suggests that your answer is fine.

My guess is that the computer answer reflects an oversight in that the climb limit wasn't checked.
Engineering specialist in aircraft performance and weight control.
2 months 3 weeks ago #2

A question just occurred to me. In the chart, the climb example comes from below the line (about 4600 ft and 10 degrees). I can't recall ever seeing a question where the height and temperature intersection is above the line.

What is the situation if it is 8000 ft and 10 degrees ? Following the chart example, the line drawn by the user doesn't cut the climb line. Does that mean that there is no climb limit for that combination of height and temperature ?
2 months 3 weeks ago #3
Last Edit: 2 months 3 weeks ago by dswire10.

The question is asking for "heaviest"... Casa loves tricky questions
2 months 2 weeks ago #4

What is the situation if it is 8000 ft and 10 degrees ? Following the chart example, the line drawn by the user doesn't cut the climb line. Does that mean that there is no climb limit for that combination of height and temperature ?

Good question and one which really needs a definitive answer. The question indicates that whichever textbooks you have been reading don't address the use of charts adequately and that your flying instructors haven't given you adequate briefings.

Not to worry, the answer is straightforward but, for the benefit of Bob's student cohort, I think I had best give a little more than a short and sweet story.

The question is asking for "heaviest"... Casa loves tricky questions

Not relevant to the question, I’m afraid, B. There is no weasel factor usage permitted with these charts, either for CASA or anyone else - it's step A, step B, step C, answer ....

The POH information, per the Design Standards for this class of aircraft (originally in the airworthiness order of CAO 101.22 – now defunct, but the basics are still in the operational order at CAO 20.7.4, at least for a little while longer, now) requires that we check for two totally separate and unrelated limitations in the takeoff calculations for light aircraft -

(a) the runway-limited TOW is what we come up with after we whizz around the boxes in the chart and gives us the limitation relevant to the physical runway characteristics.

While this stuff can be presented in various ways, the most common, now, is the US style seen in the CASA exam workbook. The old DCA (a predecessor of CASA) charts (which we are looking at in this thread) were developed for the specific purpose of providing for the old Civil Mk I and Mk II flight manuals generated by DCA to address a great many deficiencies in light aircraft operational information back in the Dark Ages. While this format is still addressed in the examination (and I have no idea why, given its antiquity) you are unlikely to see any of this format in the real world these days since things changed dramatically, post Yates Report, and the old stuff was consigned WPB. Indeed, if you have come across any old charts in POHs, could you let me know, please ?

(b) the WAT-limited (climb) TOW is what we come up with from the sloping line in the bottom lefthand density height carpet and makes sure that we have a reasonable chance of clawing our way skyward, regardless of ambient conditions. Again, this can be shown in various styles, as you will see in the exam workbook.

Similarly, the landing case is addressed in like manner although the required numbers be different.

These two limits (runway and climb) have nothing to do each with the another but BOTH must be satisfied for every takeoff - ie the limiting TOW is the lesser of the two weights arising from these limitations.

So, if there be a climb weight limit in your takeoff chart, you MUST check it, EVERY TIME.

Side Note: WAT stands for Weight for Altitude and Temperature and is a line-in-the-sand airworthiness minimum climb gradient requirement to give the aircraft a modest climb capability regardless of other considerations. WAT limits are for nil wind, out of ground effect climb performance.

WAT limits are pretty straightforward for light aircraft but, should you progress to heavies, there is a host of WAT limits to be considered and you will get a grilling on them in your endorsement courses (or should - if I'm running your engineering ground school, you certainly will). The ATPL exams sort of address them but not in a rigorous manner.

The presentation can be either as two sets of graphs or, very commonly, the climb data will be shown overlaid in the runway charts, as in this thread. For students who haven’t had the story told properly, the overlaid style can lead to confusion.

So, let’s first separate the two charts and look at their standard use.

If we remove all the extraneous material and the climb data, the basics of the runway-limited chart is as shown in Fig. 1. 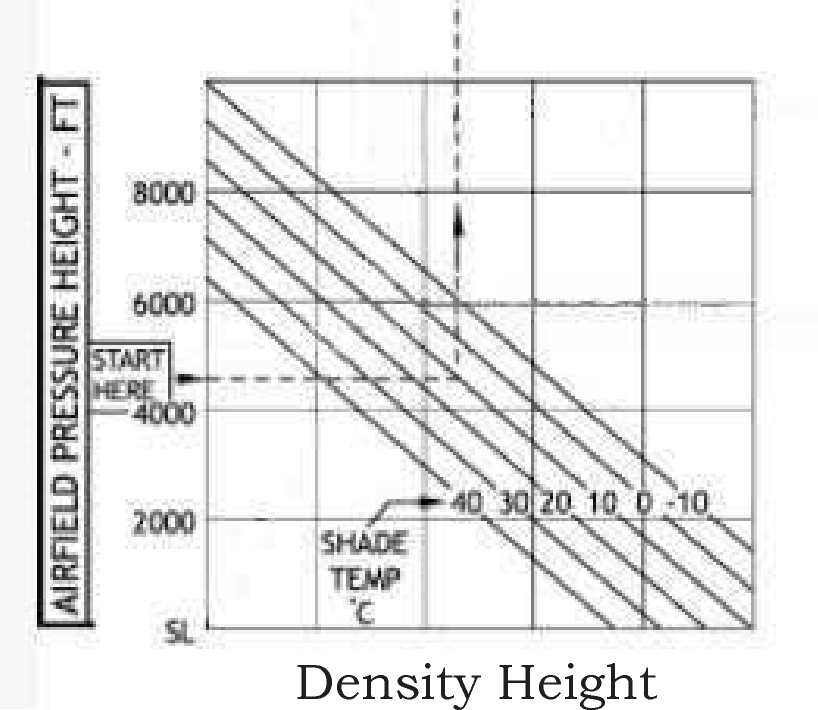 The use is pretty straightforward and you will have had much practice at whizzing around the boxes. The bottom line of the lower lefthand carpet usually is drawn to density height (although often not identified explicitly). This particular chart is a bit rough and ready in this regard. I have no idea who produced it (certainly it’s not one of mine nor, given some of the drafting clues seen, not one of DCA’s). About the kindest one can say is that it’s not well-drawn although, for the exam, this is quite irrelevant.

In the absence of a density height input, we use the combination of PH and OAT to find an entry point into the calculation process, and then move up into the distance carpet and on around the various boxes until we get an answer representing the runway-limited takeoff weight for the day.

The climb-limited data is shown in Fig. 2 and, as you can see, is a pretty simple sort of graph. Depending on the developer's preference, you might see a graph, a simple nomogram, or a table - same, same. 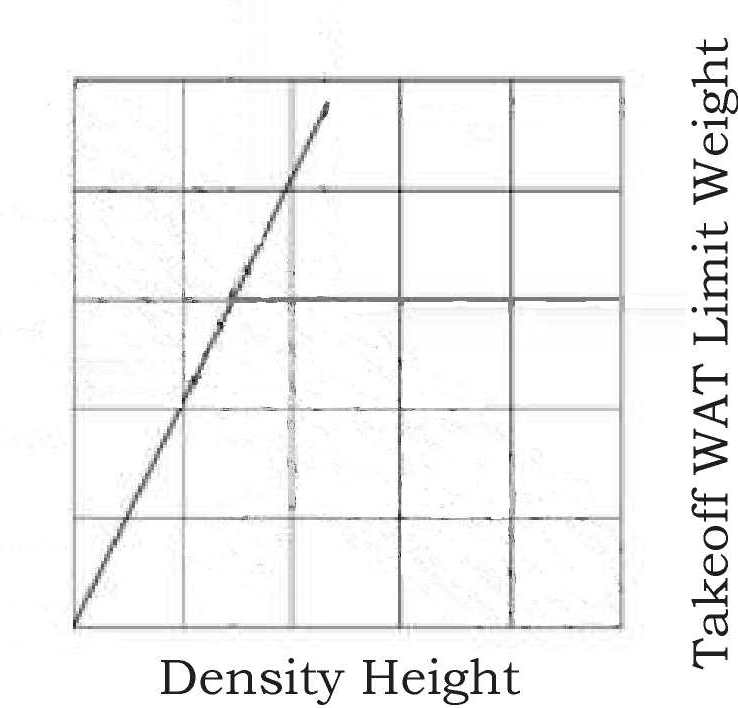 The presentation can either be as a separate graph or combined. Why the difference ? Comes down to the choice of whoever is putting the charts together. The combined chart saves a bit of paper real estate and that’s about the sum of it.

It now is a pretty simple step to summarise the use of the combined carpet as shown in Fig. 3. 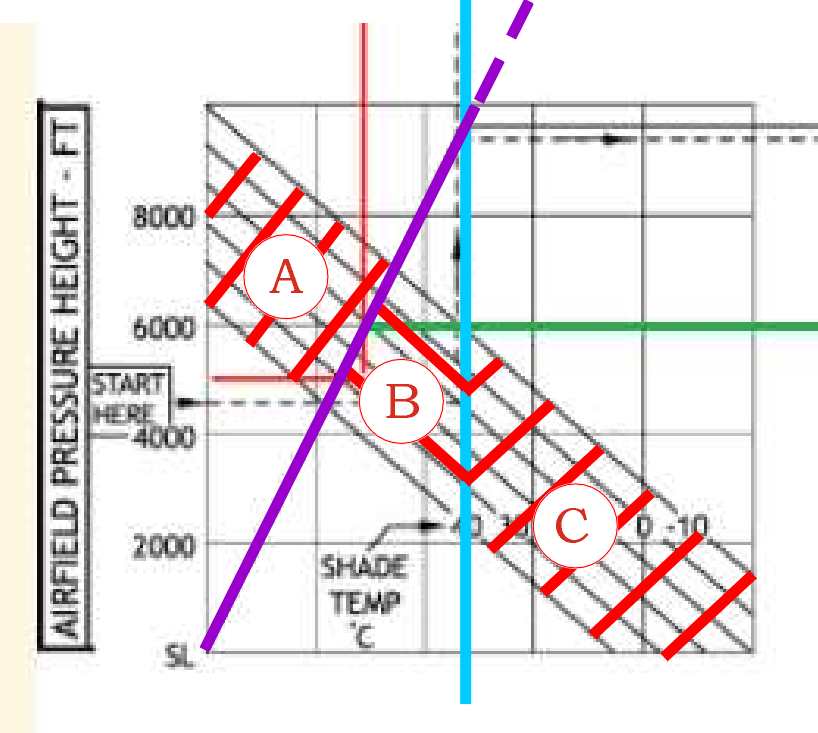 (b) region B - between the purple and blue lines. From the pressure height/OAT intersection, run UP, as before, for the runway-limited case. For the climb-limited case, run UP to the climb line and then across to the weight scale.

(c) region C - right of the blue line. In this region, the climb limit is always greater than the TC/POH MTOW so the operation is NEVER climb-limited. We can ignore the climb consideration and just concern ourselves with the runway-limited weight case.

Easy - you run down to the line, across to the weight scale, and reduce your weight to something less than 900 kg.


If there be any questions, please do put them into a post and I can answer them in order. This is part of my technical engineering (and flying) background so pick my brains as part of your pilot learning process. You are not likely to come across many folk in your later flying days with a performance testing and certification background.
Engineering specialist in aircraft performance and weight control.
2 months 2 weeks ago #5

Thank you for the prompt answer. I think I get the picture, now.
2 months 2 weeks ago #6