Would you like a live-streamed Q and A session?

Would you find its valuable to participate in a live-streamed Q and A session?
You can submit questions prior to the event, as well as submit them during live chat.

Would you sign up for this?
We would love to hear your feedback.

Email the office to register your interest and what subject you would like covered. This email address is being protected from spambots. You need JavaScript enabled to view it.

I am writing to ask about the forces in a glide. I would like to I have the correct understanding of these basic concepts before I study further, I appreciate your help!

First, I noticed that in the study guide, no matter how lift and drag changes in direction and/or magnitude in a glide, they must be perpendicular to each other. However, as I know, lift is perpendicular to relative airflow and flight path, but not the thrust nor drag. An example is that an aircraft flying level can have a very high angle of attack but with thrust pointing upward. I wonder if I have mixed up some important concepts here...Please let me know if I did. My question is, must lift at any time be perpendicular to drag in a glide like what is shown in the figure?

Second, as a student I found a lot of explanations of how an aircraft descend/glide. One of them is shown below (explanation A) while the study guide uses explanation B. May I know if they actually have the same result?

Third, I would like to confirm whether my understanding of increased drag in a glide is correct (shown in explanation B ). If the pilot has done anything that increases drag (especially lowering the flaps and increasing AoA), the drag and lift will both change in direction (D->D1) (L->L1) as well because the resultant of lift and drag (I named it RLD for convenience) always be fully vertical (opposite to weight) and has the exact the same magnitude with weight. Also, the lift and drag will always be perpendicular (not sure if it is right at the moment).

Thrust will have to be the component of the engine's thrust that acts along the direction of motion. There is no need to explain why lift acts at right angles to drag. Lift and drag are figments of our imagination. It's our choice to decide the direction in which they act.

bobtait wrote: If you are going to draw a vector diagram representing a climb with only four forces (lift, weight, thrust and drag), you are going to have to redefine just what is meant by the total reaction, lift and drag.

Thrust will have to be the component of the engine's thrust that acts along the direction of motion. There is no need to explain why lift acts at right angles to drag. Lift and drag are figments of our imagination. It's our choice to decide the direction in which they act.

Thank you very much for your explanation. May I know further about the definition of "total reaction"?

When it comes to the generation of lift, the study guide (p.36) quotes Newton's law: "for every action there is an equal and opposite reaction". I understood that the action in the case refers to the downward deflection of airflow, however what I don't understand is why its reaction should be understood as a force pointing backward of the wing. I thought it should be like this (coloured magenta): 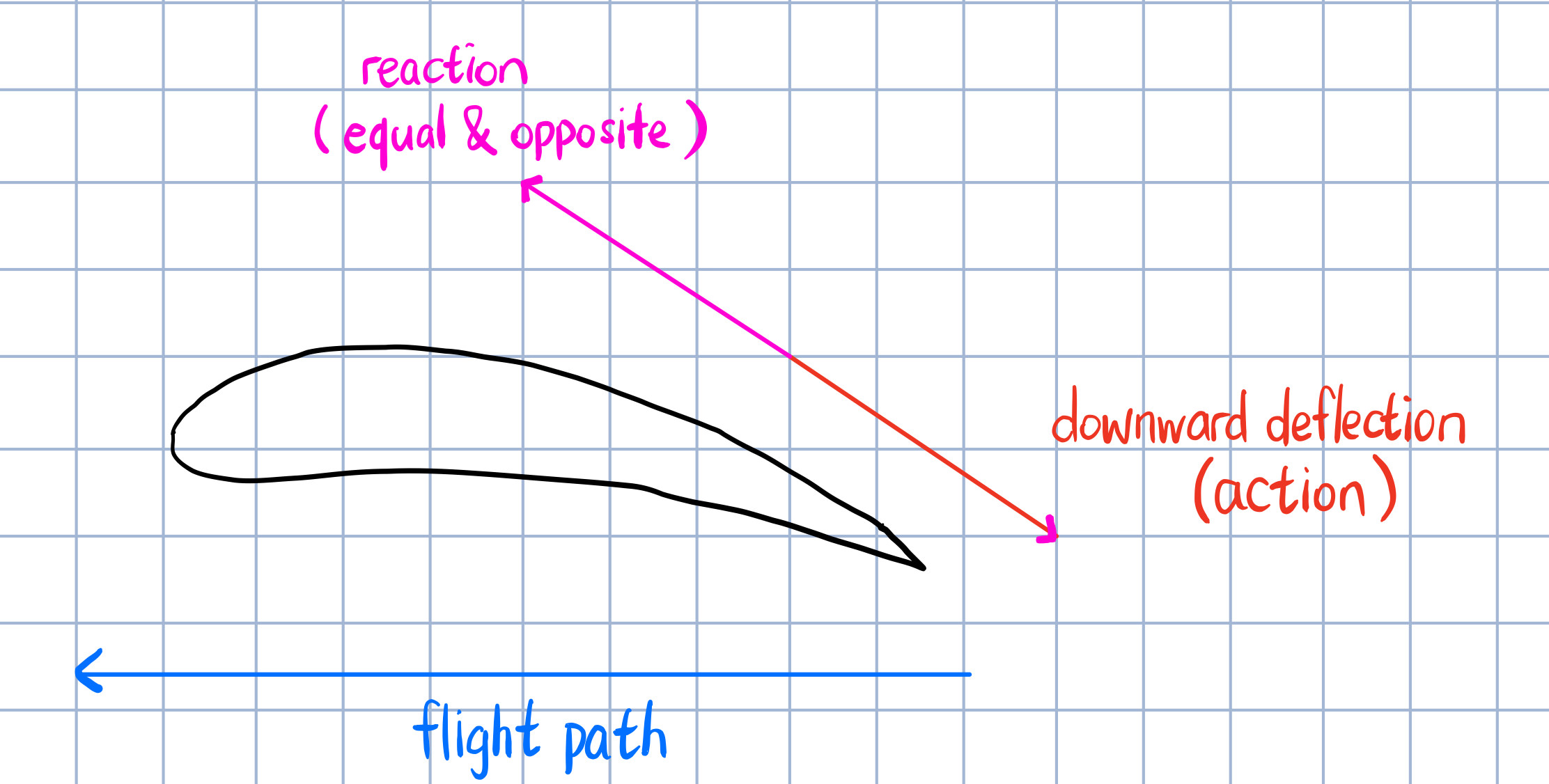 Sorry I don't have the background of physics, please forgive me if I asked something too simple.

That's the direction change. However the air stream also suffered a change in speed during its passage over the wing. It was slowed down by friction plus its impact with the wing. That can be thought of as a force acting against the direction of motion of the air stream (forwards). The equal and opposite reaction to that is a force acting against the motion of the wing (backwards).

In any case, if the total reaction acted forward of the the perpendicular to the direction of motion, it would be assisting thrust and you would have a perpetual motion machine! omg!
2 years 5 months ago #4
Last Edit: 2 years 5 months ago by bobtait.