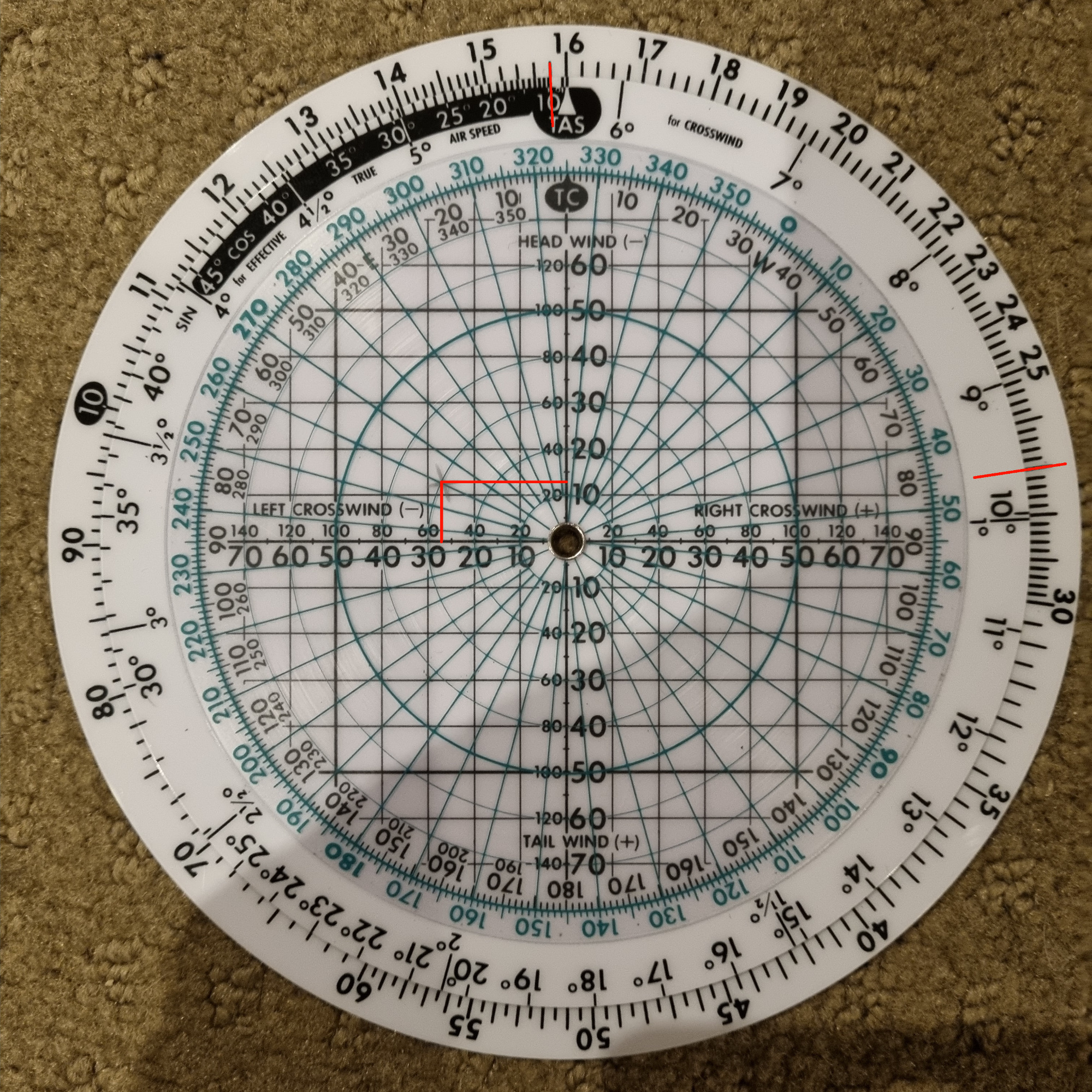 However considering a crosswind of 27kt which would be just under 10° and ignoring the ETAS component I end up with 187kt GS-home / 133kt GS-out.

Using these figures give me a final result of 226nm in 102.2 minutes.
Some might say close enough to 228 given the available options.

Just wanted to see if there are any methods I could apply to use the flight computer better ?
2 weeks 2 days ago #1

Folks tend to get excited about ETAS. The correct solution is with ETAS, regardless of drift angle. There is no reason why you should worry about not using ETAS at lower drift angles, although, once you are down to, say, 5 degrees, the difference is negligible. Suggest you just run the calculation with ETAS all the time - after all, this is the mathematically correct solution. CASA has noted that they ignore ETAS below 5 degrees drift angle. You can see this effect, quite easily, in your graphic - at 10 degrees drift, the difference between TAS and ETAS is a whisker over 2 kt, while, at 5 degrees, it has shrunk to somewhat near zero.

(c) following on from your comment on 10 degrees and ETAS, how ever did you arrive at the G/S values you cite ? (I know how you got them but it's necessary for you to realise what you have done here ....)

Just wanted to see if there are any methods I could apply to use the flight computer better ?

I think the main thing is to be a little more careful with your housekeeping ? Most importantly, careless errors are the undoing of the majority of students who otherwise are quite competent.

Side note: Most folks don't understand what the scales are doing for you. On the wind side, the outside scales are just the same C/D slide rule scales which are on the other side of the computer and they are used in the same way for multiplication, etc. However, to make things easier for you, Captain Ray Lahr, when he developed this version of the computer, rescaled the "10" on the inner scale to be labelled "TAS" and the remainder of the inner scale to be labelled with the angles at the values of sine and cosine for those angles. No more, no less.

Then, when you run around (to the right) to the drift angle, you are simply multiplying TAS x sin(drift). Similarly, when you run around (to the left), you are simply multiplying TAS x cos(drift) (which gives you the TAS value resolved along the track vector - which we refer to as ETAS. It doesn't matter what you choose to call it, it is just the resolved component of the HDG/TAS vector).
Engineering specialist in aircraft performance and weight control.
2 weeks 1 day ago #2
Last Edit: 2 weeks 1 day ago by John.Heddles.

Thanks for you insight. Much appreciated
2 weeks 1 day ago #3

Yes, but point (c) is the important one ?
Engineering specialist in aircraft performance and weight control.
2 weeks 1 day ago #4

This is getting embarrassing. I got there by using the cross wind rather then the head/tail wind.
During previous training by another service provider we were told to ignore ETAS below 10. Always applying it makes for sense to get a more accurate result.
2 weeks 1 day ago #5

Don't fuss too much.

Just make sure that you tuck the lesson away and don't make the same mistake again ....

During previous training by another service provider we were told to ignore ETAS below 10.

You can do that ... but why would you bother ? No advantage and the answer then involves an unnecessary, incorrect component.

Unfortunately, many instructors are only capable of regurgitating that which they were told in their own training. It is unfortunate that technical rigour is not prized in the operational theory side of the Industry.

The ETAS consideration reflects the fact that cosine(angle) is asymptotic to 1.0 as the angle approaches zero. So, if the sum is TAS x cos(drift) then, as the drift reduces, the value is asymptotic to TAS. If you reflect on the values on the inner slide rule scale, it is obvious that, once you are down around 10-15 degrees, things are getting to the point where the difference is reducing rapidly and, at some point, you can ignore the correct value and use the approximation without wearing any significant error.

My point, though, is that you always are setting the scale to get the sin value for the drift component so it is pretty well no extra load always to figure and use ETAS .... and it is the correct calculation.
Engineering specialist in aircraft performance and weight control.
2 weeks 1 day ago #6
Last Edit: 2 weeks 1 day ago by John.Heddles.