The textbook does not provide any indication from where these figures are obtained. Can you expand on the material in the textbook to fill in some detail, please?
1 month 2 days ago #1

Thank you for that reply and information Stuart. Are you able to cast some light onto the 120 ft/degree factor?
1 month 1 day ago #3

1° change in temperature equating to 12O ft change in height is also an approximation. As far as I know, it has no mathematical basis but rather is the result of actual measurement.
1 month 1 day ago #4

That has me confused. I would have expected both to have some relationship to the underlying ISA mathematical model.

However, thanks to both for your answers.
1 month 21 hours ago #5

If I may add a few words to Stuart’s and Bob’s posts.

I would have expected both to have some relationship to the underlying ISA mathematical model.

That is the case. We can derive the two rate figures without too much effort from the atmospheric models.

(b) “density height” is the height where a particular density exists.

Traditionally, pilot calculations use a figure of 30 feet height change for each hPa variation in pressure. This, generally, is wrong as the actual figure varies very strongly with height. However, for the purposes of pilot calculations, where we are interested in takeoff and landing performance and low level terrain clearance, the calculations are reasonably fit for purpose.

The following graph gives you an idea of the rate variation for the troposphere. As the height increases, the rate (being exponential) ramps up very rapidly. For instance, at 50000 ft, we are looking at a figure a little below 180 ft/hPa.

While we might use the 30 ft/hPa rate value for all exam calculations, we should keep in mind that it is pretty silly and not at all appropriate for calculations relating to higher levels. The discrepancy between the actual exponential variation and the constant pilot calculation figure leads to much confusion when pilots run inappropriate calculations and then can't reconcile the difference between ISA tabular pressure data and their calculations.

If we know the pressure height, we can use standard equations in ISA-speak to work out the density at that height both for standard and non-standard temperatures. In turn, we can then use the density by height equation to figure out the height in “standard” ISA conditions at which a non-standard density occurs (ie density height). 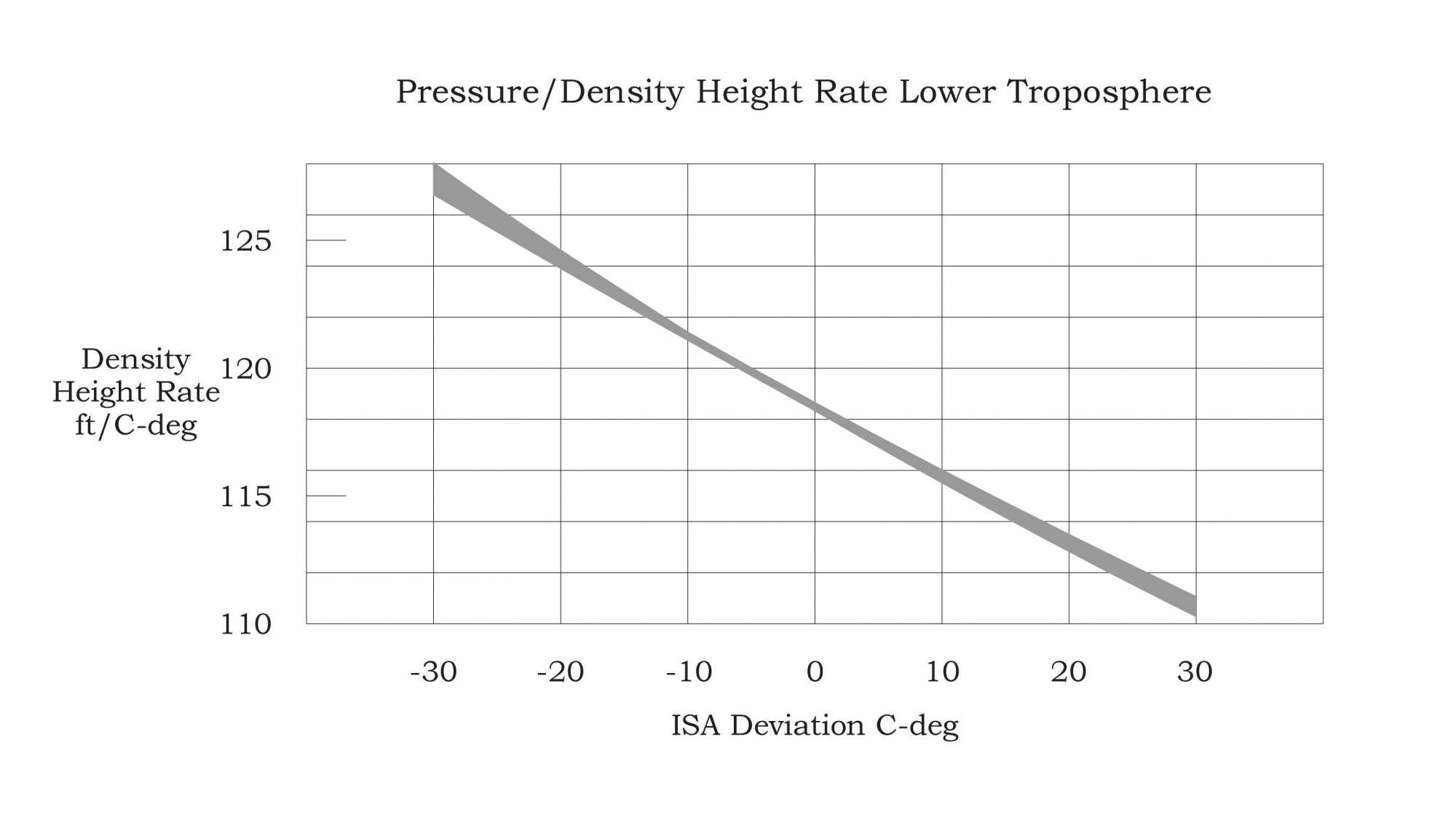 If we model these curves with straight lines (they aren't quite straight, but fairly close) it just so happens that the various (straight) lines intersect nearly at ISA + 0 at a value close to 118.8 ft/C deg so that would look to be a pretty good mean value to use following a similar reasoning philosophy to the pressure height figure discussed previously. You will see this approximate figure in various textbooks and other technical papers – eg the US National Weather Service.

Now, fortunately, whoever came up with the 120 ft/C deg rate figure we use, generally, for pilot calculations, had enough sense to realise that

(a) no-one in their right mind would want to use a figure like 118.8 ft/C deg when, for pilots, we like to facilitate mental calculations

(c) far more importantly, 120 = 12 x 10. Now, up until the early 1970s, when electronic calculators first started coming onto the scene, EVERYONE learned, and could parrot off, their multiplication tables. This meant that, by using 120 (rather than that silly 118.8) we could all do these sums in the back of our heads while doing ten other things at once in flight.

So, once again, like the 30 ft/hPa, 118.8 (or 120) ft/C deg is applicable for one (itself approximate) condition only. So far as we need to run sums in a manner which is fit for purpose (ie takeoff and landing), it is suitable for use, given the normal safety margins we build into our flying protocols.

Accuracy and Precision in Calculations

So, the calculations we use routinely are a bit rough and ready (although reasonably fit for purpose). There is no point, or justification, in running your calculation sums to the nth decimal place, is there ? Might I suggest that you just run your exam calculations to the nearer foot – and, even then, we really are having ourselves on a bit.

When Did the Rate Figures Originate in Pilot Practice ?

I don’t know the answer because I have never been able to locate a paper or text which claims an answer. However, it is unlikely that they predate WW1 military aviation or post-date the introduction of the sensitive altimeter in the late 1920s. The first generally accepted atmospheric model was introduced in the 1920s, although work on less rigorous models dates back quite some time prior to that decade.
Engineering specialist in aircraft performance and weight control.
3 weeks 5 days ago #6

That is the sort of information I was seeking, thank you. A further question.

The ISA model is rather idealised and is based on a dry atmosphere which, of course, is pretty well never the case. That is to say, if we are talking ISA, humidity doesn't come into the discussion. This is a bit awkward when the real atmosphere always has some moisture content.

The met folk handle this by defining a not-quite-per-thermometer temperature, variously called virtual (or, sometimes, density) temperature. Using this fudged temperature figure, we can use the standard idealised equations for moist air calculations. A google search will provide you with lots of entertainment wading through the derivation of virtual temperature. You can save yourself some effort by having a read through this paper - commons.erau.edu/cgi/viewcontent.cgi?article=1124&context=ijaaa

As a side note, virtual temperature and humidity calculations don't come into pilot exams at any stage. About the extent the pilot needs to know is that increasing moisture decreases the actual density of air due to the difference in molecular masses.
Engineering specialist in aircraft performance and weight control.
1 week 5 days ago #8
Last Edit: 1 week 5 days ago by John.Heddles.

Thank you for your response, John, I shall undertake some research to amplify the matter.
1 week 3 days ago #9