Ignoring balance consideration and assuming no limitations are imposed by runway lengths ay any air port, the maximum fuel that can be loaded onto an echo aeroplane at take off for the flight described above is closest to.
select
A) 163 US Gal

Sir can you help me out with these question i'm stuck with it..
1 month 3 weeks ago #1

Instead of just seeking an easy way to do the problem, why don't you consider scanning and posting your attempt at the answer and then we can critique it.

The question is pretty standard so, if you are having significant problems, it is a case of your technique knowledge needing a bit of updating.

see this working if it's ok..i did not ask for the answer I asked nicely for explaination how to go about that question and why we don't calculate the zero fuel weight as the third value..

Please if your not willing to help, don't help and post with anger
1 month 3 weeks ago #3

Please if your not willing to help, don't help and post with anger

I was not then, nor am I ever, angry - a very wasteful emotion in the normal scheme of things. Certainly, though, trying to lend you a hand

Your second post provided useful information regarding your concern - the first made no reference to the ZFW query.

Turning to your questions -

First, I note that you use an SG of 0.72. Strictly, we should be using 0.71 as that is the figure implicit in the loading system. Not a major concern, though, for an aircraft with small fuel tanks.

Regarding the ZFW query, we wouldn't concern ourselves with the ZFW as it is not relevant to the question, other than for the normal protocol of checking that we do not exceed it.

The operation is landing weight limited and the fuel load will be restricted to (by my calculations) 125 USG at takeoff which makes option (c) the appropriate answer.

Options (b) and (d) can be discounted as obvious distractors so it was only a choice between (a) and (c).
Engineering specialist in aircraft performance and weight control.
1 month 3 weeks ago #4

Thank you very much sir..now its simple and clear
1 month 3 weeks ago #5

G'day John the reason we use 7.2 is that is the figure now in the ERSA they changed it about 18 months ago for whatever reason. 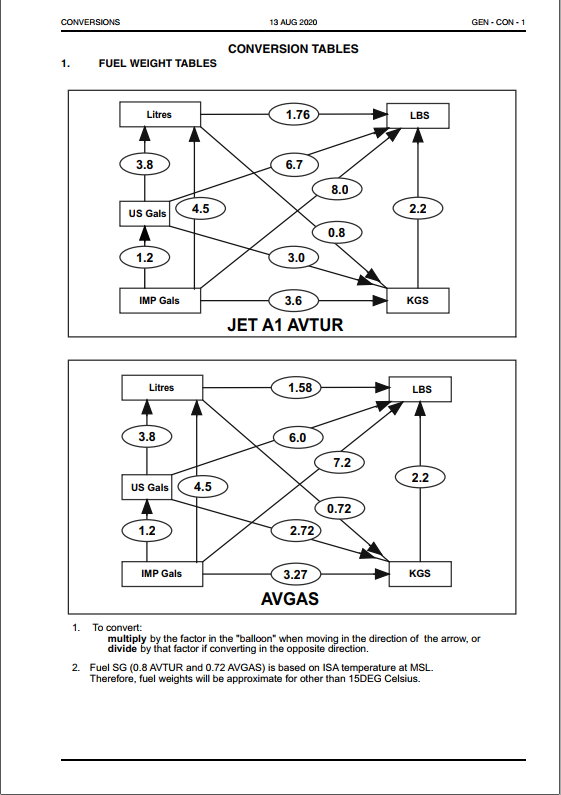 All fine there, Stuart.

Being the No. 1 WCA ticket holder (since way back at the start of July 1976) I have a little thing about SGs. For the smaller lighties it really doesn't matter much what is used operationally However, I endeavour to get some sound ideas in students' thinking processes on the subject. If I might be permitted to summarise the story for the thread readers -

The history goes back a long ways. In the ancient days, we had a raft of different fuel grades. The SGs sort of fell into two groups - for the lower ratings (80/87 and below) around 0.72 wasn't too bad an average and was accepted for modest quantities. Similarly, for the higher grades, around the 0.71 value was reasonably good. For larger aircraft - ie larger quantities - the fuel SG was measured, either with the ship's hydrometer or by reference to the refuellers, who knew the SG for dollar reasons.

In later years, a combination of commercial reality (which rationalised the range of grades available) and political pressures (eventually the system saw reason and started to get rid of those nasty lead compounds which did all sorts of damage to folks' health), led to our ending up with only 100LL and 100/130.

I've been running hydrometer readings on these over many years when weighing aeroplanes and the typical values are around 0.72, or a bit less, and around 0.695 to 0.7, respectively.

For the exams, of course, whatever the examiner wants is the way to go. So far as the ERSA goes, again it doesn't matter too much for small quantities as the end value is much the same. For the bigger GA twins, where the tanks can be reasonably large, one should use the actual SG or something reasonably close. Blind use of the ERSA data might, just, cause some embarrassment at the enquiry - a well-briefed barrister potentially could have a field day with SG nitpicking were the accident aircraft to have been on the (calculated) limit weight.

As a sideline, CASA (as DCA many years ago) produced a useful little monograph on weight control, the latest version of which can be downloaded from the CASA website at www.casa.gov.au/sites/default/files/_ass...0/weight_control.pdf
I don't know who, specifically, put it together, but I presume it would have been John Fincher or, perhaps, Icko Tenenbaum - certainly the style has the feel of John's writing. I commend the document for reading by pilot students as it covers all the basic stuff on weight control. There is not much on complex loading systems, which is unfortunate but that reflects the fact that the original document was written when trimsheets and the like were the province of the airlines. GA folks, in general, had never heard of them until I started a trend to introduce them into the GA fleet in the mid-70s. Now, we even have one of Norm Overmeyer's old sheets (modified slightly by Bruce Clissold at the request of the then CASA theory examiner) used in the CASA pilot exams for loading work.
Engineering specialist in aircraft performance and weight control.
1 month 2 weeks ago #7
Last Edit: 1 month 2 weeks ago by John.Heddles.