× Welcome to the CPL Navigation question and answer forum. Please feel free to post your questions but more importantly also suggest answers for your forum colleagues. Bob himself or one of the other tutors will get to your question as soon as we can.

Ok…clarification for the blonde over here…..
In a tailwind…..your ground speed of all of the speeds is highest
True Airspeed would then be higher than you Indicated Airspeed

In a headwind …your Goundspeed will be the lowest of the speeds
Indicated Airspeed would then be higher than your True Airspeed….
How is it… that this bit of info always gets me muddled up

Naah, nothing to do with hair colour. Everyone struggles at least a bit when understanding the differences.
Thankfully there is a simple flow chart on page 23, CPL Navigation book explaining how the speeds are derived.
Please note, explanation below is not 100% complete, but it may help with understanding the concepts. 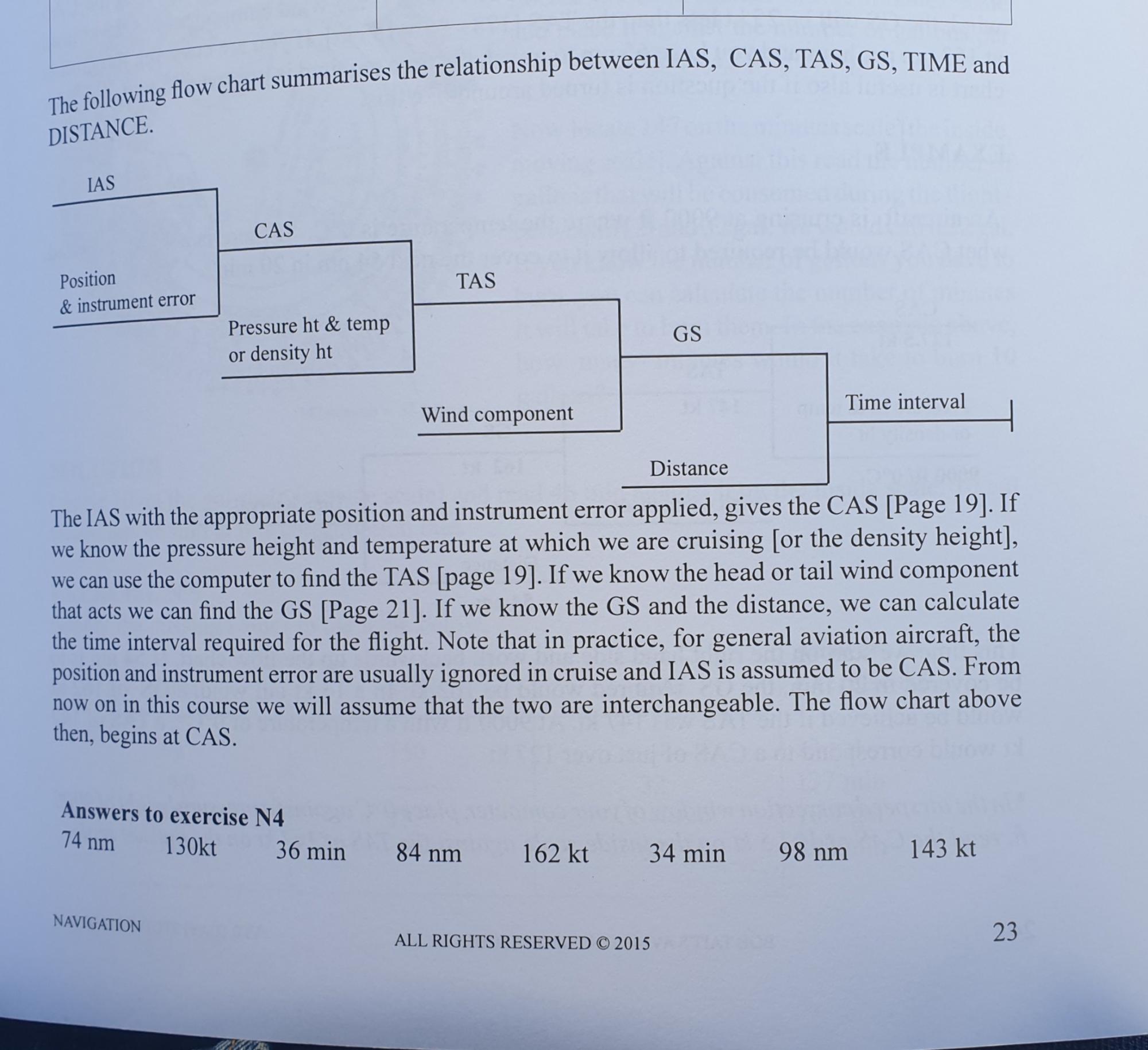 So,
1. IAS (indicated) is what is measured at the pitot tube, how fast is wind blowing through the pitot tube. Let's say it is 100kt at 0 ft Density Altitude (or let's say at sea level).

2. CAS (calibrated) means that no instrument is 100% accurate, therefore to get exact wind speed, you use CAS correction plate placed next to ASI. For light aircrafts the difference is minor, and likely you won't find it in e.g. a Cessna or Piper, therefore CAS = IAS.

3. TAS (true). as we said at 0 ft Density Altitude the ASI was showing 100kt. However when going higher, the air molecules are separated further between each other and the ASI will show 86kt IAS at 10000ft when you are flying
actually 100kt.. Or if your ASI is showing 100kt, you will be actually flying faster at 116kt at 10000ft Density Altitude. This is TAS, corrected for air pressure/density/temperature. 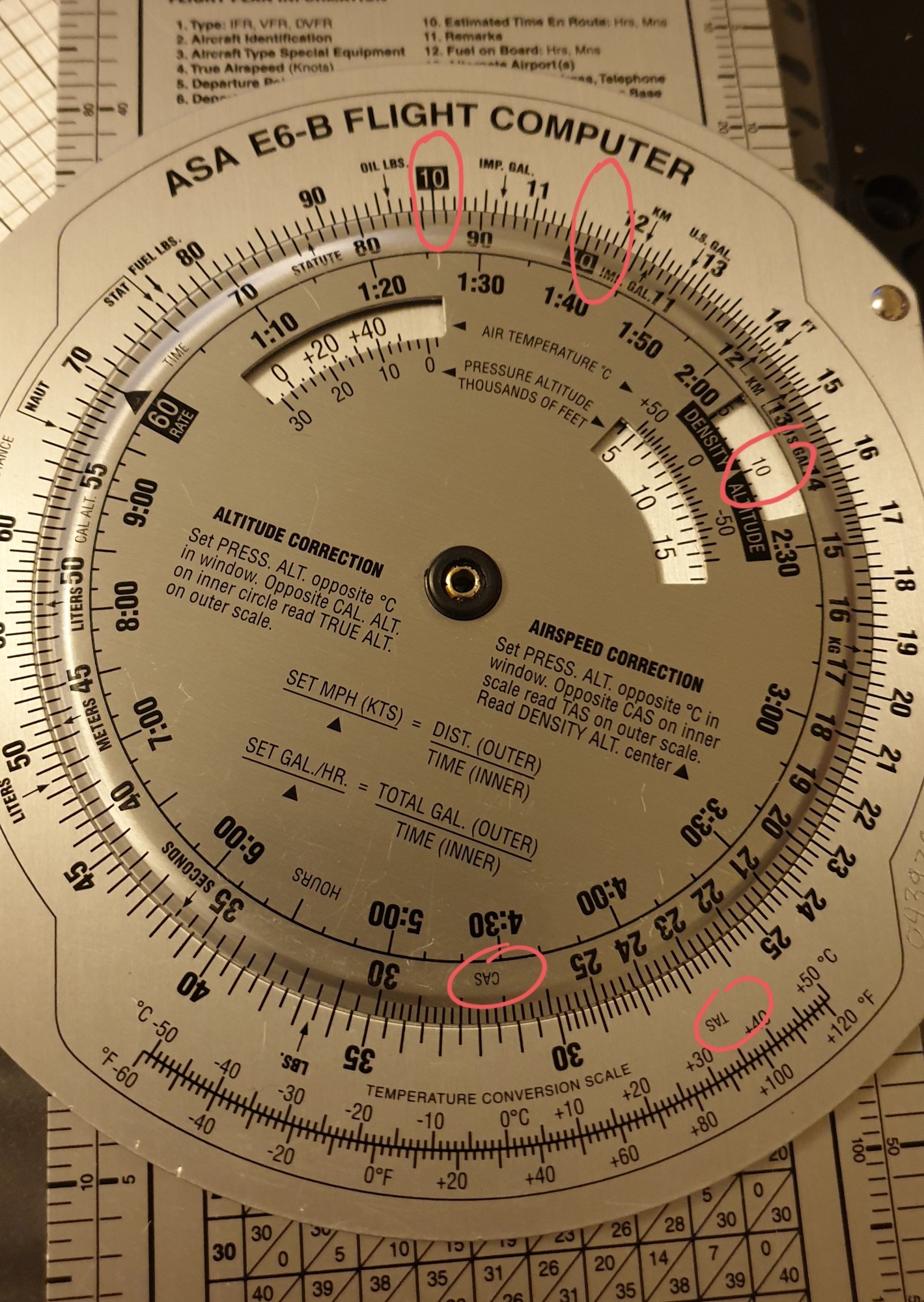 4. When you apply winds to TAS, you get GS (ground), which is the speed you travelling over ground. If your TAS is 100kt, and headwind 10kt, your GS will be 90kt. This is the speed you read on your GPS.

Sophie, you're tending to overthink this a little, methinks.

First, a useful little mnemonic - which appears to date back to the quite early days of US military aviation - "iced tea is a pretty cool drink" to cover the order of things -

IAS - what the box reads

CAS - in effect sort of a "true" value of IAS

compressibility correction - as the Mach Number gets above trivial values (say, 0.2 - 0.3) the air flow to the pitot starts to see the air "squashed up" a bit and the ASI starts to over read so that the value we use (CAS) progressively gets into an erroneous value. There is a standard way of correcting for this to arrive at EAS. For low performance aircraft (ie low altitude and low speed) Mach Number is pretty low and, so, we ignore compressibility corrections and EAS for typical training aircraft.

EAS - this is the speed on which we base load calculations as it is the best value we have to represent the real airflow around the aircraft. For low performance aircraft, such as the typical training aircraft, we can ignore it altogether and consider that CAS = EAS

density correction - the ASI will read more or less correctly at standard (ISA) sea level conditions. As we move away from ISA sea level conditions, the errors start to mount. Fortunately, the correction is very simple. It is useful for pilots to know the material as this gives us a way to figure out local atmospheric density, should you ever have a need to know such stuff.

The equation to correct EAS to TAS is shown below. As we are concerned with low performance aircraft, we will ignore EAS and use CAS in its place.

As an aside, when we play with performance stuff, we make considerable use of non-dimensionalised numbers (ratios, in this case). You may come across references to sigma (as above), delta (δ - ratio of pressures), and theta (Θ - ratio of temperatures) in your general aviation reading.

Now if we know CAS and sigma, for our low performance aircraft flying along at whatever height, then we can figure out the conversion from CAS to TAS. For low speed (ie non-compressible) flight, any of the navigation computers will do this for us.

Bosi, (that nice chap) has posted a scan of a Dalton (E6B) computer with this stuff shown, so we will use his scan for an example.

Looking at Bosi's scan, the airspeed cutout is set to give a density height of 10,000 ft. This setting (known as a nomogram), while providing the density height for us, is not intended solely for that purpose. Its main purpose is to set the outer slide rule C/D scales to specific values.

If you look at the settings Bosi has ringed, at the position where the outside scale is "10" shows, on the inner scale, a value of 0.86. Notice that this is the value we worked out, above, for √σ = 0.8594, rounded off to two decimals for the slide rule precision.

Similarly, if you look at the position where the inner scale is "10", this shows, on the outer scale, 1.161. Again, notice that this is the value we worked out, above, for 1/√σ = 1.1637. The discrepancy simply reflects the fact that we can't read the third decimal all that accurately on the slide rule.

So, what the airspeed cutout is doing, is setting up the multiplications

depending on which way you want to do things - same result, though.

So, we can use the whizz wheel to get the value of sigma for any height and then multiple this by the standard sea level pressure to get the density at that height. You can use this to impress your colleagues at the Aero Club bar on a Saturday afternoon, should you so desire ....

Just a couple of clarifications, though, if I may -

2. .... For light aircrafts the difference is minor, and likely you won't find it in e.g. a Cessna or Piper, therefore CAS = IAS.

Again, not quite. The driver in calibration is the altimeter, for which there are error limits. Once these are met, the end result is that the ASI errors will be small and, sometimes, zero. All aircraft will have a PEC card, including Cessnas and Pipers. Because the PEC is small for the ASI (except around the stall), we usually can approximate CAS to IAS without too much problem.