× Welcome to the enquiries forum. this is the place to ask questions relating to our books, our courses or the school. If you have a more specific problem relating to aviation theory, check out the Question and Answer forums. That's the best place to post your technical questions.

You said that Va was limited by the max force the wings could cope with. If that was true, Va would not decrease with decreased aircraft load.
3 years 10 months ago #1

Here is a link that might help with the understanding of Va. There are plenty of other reference online if you want to dig a little further.

One explanation of Va

Said it before, say it again, the amount of force the wings can cope with does not explain why Va lowers with lowering airplane weight. When the plane becomes lighter, a given AoA and airspeed will result in greater acceleration, and it is the greater acceleration that will break the airplane. Force = mass times acceleration. F=ma. So, if they force is the same (AoA and airspeed), then the airplane will accelerate more if there is less mass. That is why Va lowers with increased airspeed.

That is why Va lowers with increased airspeed.
Very confusing - perhaps the following will help!

The Manoeuver Speed Va can be defined as the max weight stall speed at the aircraft’s designed “limit load”. The limit load for a utility category aircraft (such as the C150) is 4.4g. I will ignore the -ve load limit for simplicity

It is helpful to think of Va as an acceleration limit and not as a force limit - see Vn diagram below.
At speeds <= Va, the wing will stall before the aircraft’s “limit load” is reached.
At speeds > Va, aerodynamic forces will over-stressed the aircraft before the wing stalls 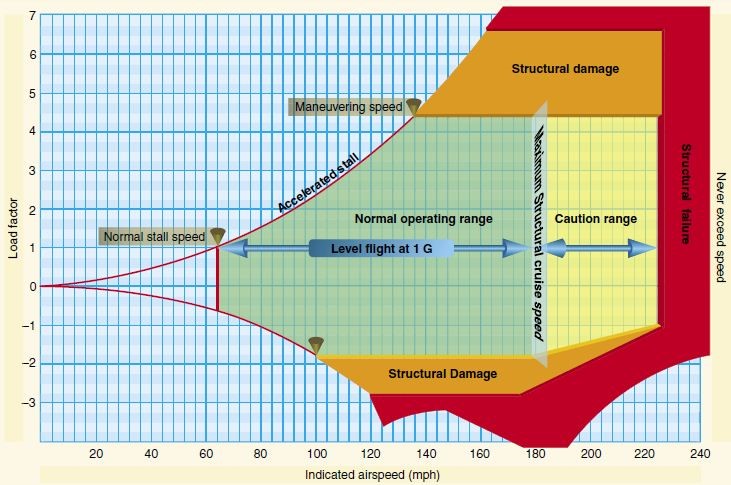 When the manufacturer determines a value for Va, they are not entirely worried about breaking the wing, they are also concerned about breaking other important parts of the airplane, such as the engine mounts, fuel tank mounts and other structural components of the aircraft. These other items don’t directly care how much force (lift) the wing is producing; they just care about the acceleration they are undergoing.

By reducing the mass of the airplane an increase in acceleration will result from any overall force applied (F=ma). That being said, if mass is decreased, a lower Va will be required at the critical angle to reduce the aerodynamic forces to maintain the acceleration at the design “load limit”

The above a very simplistic view of why Va reduces as weight reduces.
3 years 10 months ago #4

When you say that "they are not entirely worried about breaking the wing" it seems like you are agreeing with me, and that I agree with you. The force on the main spar of the wing will be the same at a given AoA and airspeed.

Page 10 of RPL/PPL says "... bending loads on the wings beyond the design limit".

And that is misleading.

(I say "misleading" rather than "wrong", because, with a maximally loaded airplane, well above Va, you could overstress the wings with an abrupt tug on the control column. But that, to take us back to the very start, does not explain how Va decreases with increased aircraft mass.)
3 years 10 months ago #5

Va is a design speed, it doesn't change with weight unless the manufacturer actually provides a range of Va v's weight.
3 years 10 months ago #6

First, I'll offer a few comments on previous posts, and then Va and, finally, we can have a look at why one should reduce Va at weights below the maximum POH weight.

... Va was limited by the max force the wings could cope with.

Not quite correct and only looks at one consideration. However, it is a common training definition and well-intentioned.

If that was true, Va would not decrease with decreased aircraft load.

We can have a think about why we might reduce Va a little later on.

Carello's link appears to be to someone who has taken the time to read a bit about the Design Standards, in particular, FAR 23.

Now, that's often a correct comment, but not encompassing. There are a few things which go into the Va recipe mix.

if mass is decreased, a lower Va will be required ... to maintain the acceleration at the design “load limit”

That's getting to the crux of the reduced Va consideration.

Va is a design speed, it doesn't change with weight unless the manufacturer actually provides a range of Va v's weight.

Certainly a design speed and this will be at maximum gross weight. Usually, one should expect to see a POH schedule of reduced (effective) Va with reducing gross weight.

Now, we should consider that Va has a number of component considerations. If one has a flick through FAR 23 (and that is a useful exercise) - remember that, if you have a particular aircraft in mind, first you need to look at the Type Certificate Data Sheet to get an idea as to what version of the regulations was relevant to the design of that aircraft. Both of these can be found via the faa.gov website.

23.335 Va must not be less than gross weight clean stall speed x square root (limit load factor). This just says that Va cannot be less than the point identified on the envelope shown in a previous post. If you haven't realised the significance of the curved line at the lower speed end, this is the stall line .. the aircraft is stalled if it finds itself above the line. If Va is selected to be higher than this speed, it need not be higher than Vc.

23.423 At Va the structure has to be able to withstand a prompt movement of the elevator either to the stop or (and this is important if you have the strength of your friendly neighbourhood gorilla) the maximum presumed pilot loads (found at 23.397)..

23.441 At Va the structure has to be able to withstand (from an initial steady flight, zero yaw condition) full rudder application or the maximum presumed pilot load.

23.445 At Va the structure has to be able to withstand (from an initial symmetrical flight condition) full aileron application or the maximum presumed pilot load.

Now, what this says is

(a) from initial, idealised conditions - we are unlikely to be able to achieve this in routine flight activities where we might wish to input significant control deflection

(c) the control input is limited by the presumed pilot load capability if that is relevant to the aircraft - it could be possible for a stronger pilot to exceed these presumed forces.

It follows that the pitching consideration may not be the limiting factor for a given aircraft, eg, as I recall, the HS125 Va was predicated on directional stablility considerations with the rudder input.

Be aware that there have been inflight failures of aircraft where operations have been outside the design envelope. You might like to search for reports on the American Airlines Flight 587 mishap. Although the following are not Va related, if you would like to research just how quickly things can get out of hand with flight path control problems, you might also like to look up the losses (at supersonic speeds) of the B58 Hustler (Nov 1959 in Oklahoma) and the SR-71 (Jan 1966 out of Edwards) and, for the latter, TP Bill Weaver's rather amazing survival. In both of these mishaps, the fuselage disintegrated - very rapidly - around the crew, killing three out of four crewmen. I imagine that Weaver didn't bother buying any lottery tickets that week .. he had well and truly used up his quota of good luck !

The AA failure led to some serious rethinking of pilot training and education.

The thing to keep in mind is that many design cases are "line in the sand" considerations and not really intended for the average line pilot to put to the test. Should you go off, fly at Va and play fighter pilot ? .. absolutely NOT .. you would be better advised to treat the aircraft with respect and gentle manoeuvring near Va. At speeds somewhat below Va you should be OK but, at the end of the day, why would you want or need to do this sort of thing in a normal category aircraft ? If you really must, go fly an aerobatic aircraft (while respecting the POH's guidance in respect of speeds for various manoeuvres) which has very much higher structural reserves. Far better if you be gentle with the machine.

Now, Va is a Design Standard thing - the aircraft envelope presumes that the aircraft will NOT be subjected to more than the design load factor (think maximum g-load) which, for many normal category aircraft, is 3.8. For the envelope shown earlier, the intersection of the stall line and the Va speed coincides with the limit load factor for the aircraft at the design (maximum) all up weight .. hence the typical comment (not quite correct) that you will always stall prior to causing damage at or below Va.

If your aircraft is less than gross weight, then the stall line compresses to the left so that, say, at gross weight, book Va you now can pull MORE than the limit load factor prior to the wing's stalling. The only way to preserve the Va pitch philosophy is to reduce the gross weight Va speed to a value which intersects the adjusted stall line at the limit load factor. In this way we don't cause any problems with any other aspect of the aircraft's structural design.
Engineering specialist in aircraft performance and weight control.
3 years 10 months ago #7
Last Edit: 3 years 10 months ago by John.Heddles.

F=ma is the general formula for force, mass and acceleration

F = gross weight x 3.8 is the formula for your airoplane

at a particular AoA and airspeed, F will remain the same. If you decrease the weight of the aircraft by 10%, then this will happen.

It is the F that is bending the main spar. The acceleration is what the main spar does to the rest of the airplane. Hence, Va decreasing is not to do with protecting the wing.
3 years 10 months ago #8

how is the force on the main spar increased?
Hence, Va decreasing is not to do with protecting the wing.

And that is how come it is misleading to say that Va is there to protect the wings.

In case anyone is interested, I will give a different example.

The maths is as follows.

F remains constant because the AoA and airspeed remain constant. When the airplane suddenly becomes 20% lighter, with no change in COG, the formula changes.