Hi Bob,
Can u provide the lift & drag formulae with a brief explanation

You would help your cause were you to show some initiative, methinks.

Note that some of the posters in this thread are accomplished engineering folk. One was the Chief Aerodynamicist for the Concorde program.

Gentry, who died last year, was a well-regarded aerodynamicist (and, to his credit, a keen yachtie). His “Origins of Lift” is a well thought of article and worth your time reading. It is the last article in the above link. As an aside, the site has some links to computer software which may be of interest to those of Bob's group who fancy themselves as gurus.

One of the biggest problems you will have is that, for every competent author/article, you will find a great many OWT rehashed quasi-techo nonsense articles on lift … just have to bear that, I suppose.

Main thing for the pilot is to have a bit of an idea what is going on so that sensible control inputs, when flying, result.
Engineering specialist in aircraft performance and weight control.
5 years 7 months ago #2
Last Edit: 5 years 7 months ago by John.Heddles.

The lift and drag formulae were established to allow aeronautical engineers and other academics to calculate numerical values for the magnitude of the forces of lift and drag given relevant data that is often not available to the average pilot. Actual values for parameters such as lift and drag coefficients are derived in wind tunnel tests for each aerofoil shape and ambient air density as a numerical value is unlikely to be available to a pilot on any given occasion.

True airspeed is best considered in conjunction with density as indicated airspeed. In the real world, the combination of TAS and density, (IAS), determine the kinetic energy of the air stream and it is this energy that is involved in the production of the forces of lift and drag.

Wing area is probably the most obvious of the variables. If all other factors remain constant, a larger wing produces more lift and more drag.

Also, see this extract from the Aerodynamics Study Guide below 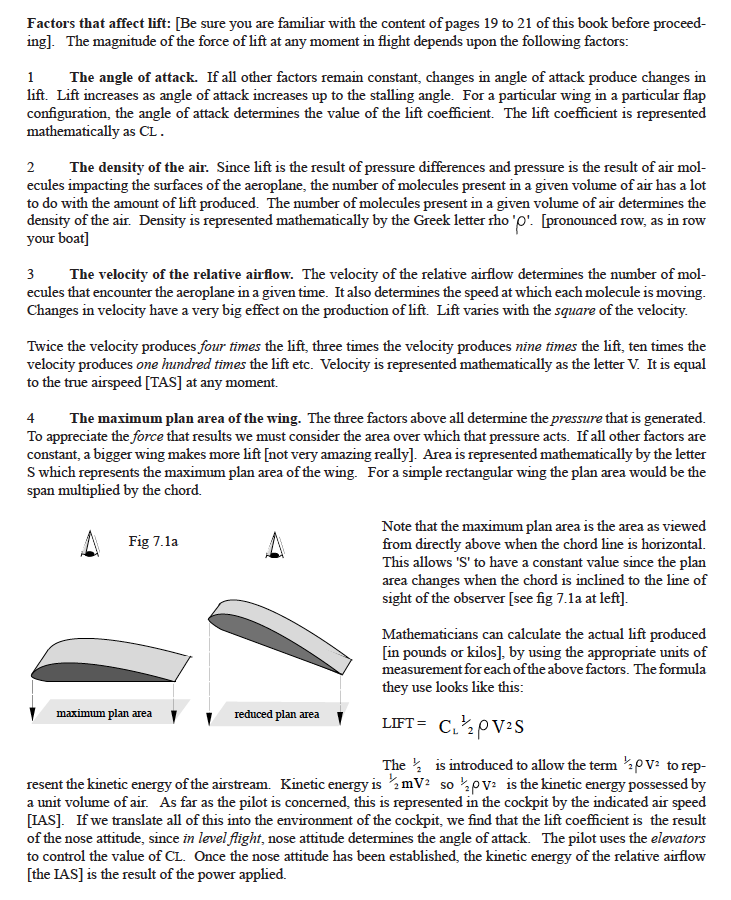 Just finished reading through the link to the pprune discussion. As a matter of interest, is John Farley THE John Farley ?
5 years 7 months ago #4

Certainly is the well-known octogenarian Harrier engineering test pilot. Google "John Farley test pilot" and you will have a few hours entertainment through the various resulting links.
Engineering specialist in aircraft performance and weight control.
5 years 7 months ago #5