honestly i m kind of loss so any help is more than welcome.

I don't have the manual so could you post a scan of the page, please ? That will help me understand what it is that you are trying to describe .. right now it doesn't make too much sense to me.
Engineering specialist in aircraft performance and weight control.
5 years 7 months ago #2
Last Edit: 5 years 7 months ago by John.Heddles. 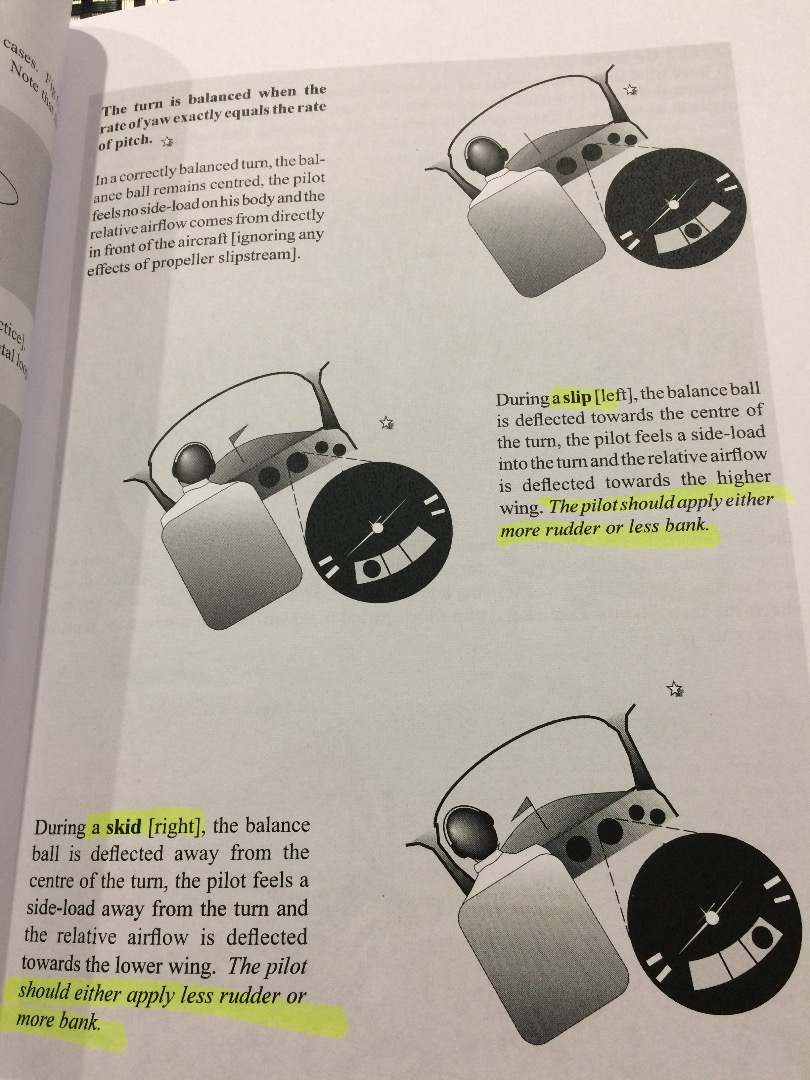 Thanks for the scan. The book description of slip and skid is pretty conventional for pilot training.

Notice that the pictures have a yaw string (masquerading as a flag) on the nose ahead of the windscreen (you will see these on sailplanes and, occasionally, light twins) –

(a) in the slipping turn, the wind is from the inside of the turn (flag flutters to the outside)

(b) for the skidding turn, the wind is from the outside of the turn (flag flutters to the inside).

(c) For a balanced turn, the wind comes in from straight ahead.

The references to rudder are to the bottom rudder, ie left pedal for a turn to the left as in the pictures.

Either we can analyse the motions in the normal flight dynamics manner – which you probably don’t want to get into unless you want a headache – or we keep things a bit conversational, ie the KISS principle.

I think you might be confusing yourself by trying to have a foot in each camp .. and getting things somewhat back to front along the way.

Better to think in the following way, I suggest –

(a) sideslip is what we are looking at here and that is the situation when the wind, rather than coming straight on to the aircraft nose, is coming somewhat from the left or the right. It is a tad confusing for new chums when we use the term “slip” to refer both to airflow and what the pilot perceives during a turn – guess you just have to get used to that like everyone else did along the way.

Putting considerations of turning to one side, what happens if you are in straight and level flight and simply roll in some bank (say, to the left) ? The direction of the lift vector (force) remains perpendicular to the wing but moves from being vertical (looked at from the ground) to being somewhat inclined in the direction of the roll input (ie to the left). This provides an horizontal component (part) of the lift which will accelerate the aircraft in the same direction as the roll (to the left). You may see references to "centripetal" acceleration .. that's the one in this case.

Very quickly, we end up with a big speed forward (the normal airspeed) and a small speed sideways (due to the horizontal lift component) at the same time. If these are added (think triangle of velocities using the nav computer) the resultant (overall) direction of the velocity (think speed) is a little to the left of the nose rather than straight ahead.

(b) in turning flight (say, to the left), the aircraft will be rolling, yawing and pitching throughout the turn, even if the pilot is not aware of all these motions. The equations are fairly straightforward but quite unnecessary for basic pilot training knowledge so let's stay away from them.

(c) for a balanced turn, we need to arrange control inputs so that the wind comes straight on to the nose, ie nil sideslip angle

(d) if we get the inputs wrong and the wind comes a little from the low side (left), we have sideslip to the left and we refer to the situation as being in a slipping turn – ball moves to the bottom (left side of the tube) somewhat.

Correction is either to reduce bank (to reduce the sideslip force and the magnitude of the sideslip) or put in some bottom rudder (increase the yaw rate to match the sideslip).

(e) if we get the inputs wrong and the wind comes a little from the high side (right), we have sideslip to the right and we refer to the situation as being in a skidding turn – ball moves to the top (right side of the tube) somewhat.

For a turn to the right, the directions reverse.

For singles, you will pick this up very quickly. Should you get involved with twins down the track, you will revisit the above in considerable detail as performance, engine out, is very much tied up with control and management of slip .. so much so, for instance, that some aircraft have sideslip indicators (eg Concorde).
Engineering specialist in aircraft performance and weight control.
5 years 7 months ago #4
Last Edit: 5 years 7 months ago by John.Heddles.

fabulous answer . you really make my day. all is very clear in my mind now.
thx you so so much.

do you know where i could find the equations for your point b) please ?
5 years 7 months ago #5

You could start here, I guess, if you just want to look at the rate equations ..

There are many net references (not to mention a raft of text books) but, beware, the math is a little torrid. For instance, you might like to use the USN reference (TR129-1) or Jan Roskam's texts for some light bedtime reading